Skip to content
Home80’s Trash of the Week: Night of the Creeps

I don’t know how this one slipped past me in ’86. I would have loved to watch a bunch of jocks and preppies get their brains eaten by space slugs, then killed by shotgun and flamethrower. This forgotten gem is sadly lacking a DVD release, but Cinemax HD was good enough to play it a week or so ago, and through the magic of DVR, I watched it last night. The movie is pretty clever for an 80’s movie about killer brain slugs, and plays some tricks on your expectations.

It begins on a spaceship, where critters that look like E.T.’s unfriendliest cousin are fighting over a steel canister. They yell at each other in some sort of crazy moon-man language, thankfully subtitled for us humans. The canister is fired into space, and then we cut to… 1959, when the world was in black and white.

Having not seen the movie or stills of it, part of me wondered if it was going to be set back then, as a goof and to play off the success of Back to the Future. They linger just long enough to make you wonder. Two college kids are on a date, parked in a convertible by the lover’s lane, when a meteor flies overhead. Uh-oh. Of course, boy-o goes to investigate, and finds a crater full of creepy black slugs, one of which leaps into his mouth. Oh that’s so gay, brah! Then his date is killed by an axe-wielding maniac, reminding us to never leave our dates in the car.

That thing is totally cockblocking me!

Then we cut back to the 80’s, and the real story begins. Similar to Weird Science in some ways, it involves two young nerds who pledge to a frat to get closer to a cute girl. They’re Chris Romero (Jason Lively, Rusty from European Vacation) and J.C. Hooper (Steve Marshall, from nothing in particular). J.C. has crutches and will do anything for a joke, while Chris is the hapless friend embarrassed by his antics. The girl of Chris’s dreams, Cindy Cronenberg, is played by Jill Whitlow, another 80’s nobody- this is her biggest role. She does a decent job, it’s surprising that she and her co-stars never went anywhere. Maybe they only look good with big hair.

As pledges, they’re given an initiation quest- to go to the science lab and steal a body, and dump it on the lawn of another fraternity. What’s a little graverobbing between friends? Seems like an innocent enough prank. At the lab, David Paymer (the weaselly guy from Payback) is the distracted scientist they sneak past. In the lab, they find a cryogenic chamber and release the body, who is the 50’s frat boy from the earlier scene. They start lugging him out, bump into science boy, and freak out, running out and “screaming like banshees!” Moments later, our scientist falls prey to the reanimated space zombie, and the fun begins.

There’s a high-strung cop named Detective Cameron who likes to answer the phone, “Thrill me!” an affection I will begin to mimic until someone beats me with a shoe. Maybe you’re a movie buff and noticed that all the characters are named after famous directors. I guess he couldn’t cast actual directors in bit parts like John Landis does, since this was director Fred Dekker’s first feature. He went on to make another 80’s classic, Monster Squad (the wolfman’s got nards!) and sadly accepted the directorial chair for Robocop 3, and sealed his Hollywood fate forever.

Anyway, the cop finds a headless corpse on a sorority house lawn, when zombie frat boy from 1959 starts going willy-nilly What’s different about these zombies is the brain slugs- they seem to turn you into a lumbering killing machine instead of the stand-by flesh-eater. The brain-eating didn’t come along until the excellent Return of the Living Dead, which was a year earlier, but apparently it didn’t catch on yet. Which is a good thing, we need some variation among our zombies. He interviews our two young nerds, who were seen fleeing the lab by the Asian janitor, and “screaming like banshees.” He likes repeating these words, and after fingering our little friends, he meets his fate in the hallway while chuckling to himself.

J.C., as the sidekick, might as well be The Brother in this film. The poor guy gets his on the shitter, as brain slugs invade the bathroom while he’s vandalizing the wall. Anyone will tell you that the person on crutches in a horror movie is likely to be easy pickings, and tragically he takes a wiggling slab of black slug in the mouth easier than Linda Lovelace. He’s the smart one of the bunch and manages to record Chris a message about how the zombies are made, and fries his own brain in the boiler room before he can become a shambling minion of the space slugs.

At least he won’t shit on the rug anymore.

As the investigation begins, Detective Cameron’s history becomes clear- he came upon the axe-wielding maniac back in ’59, and killed and buried the monster in a spot For some reason, him telling Chris this is enough to bring the buried monster back to life, and it hacks its way through the floor, kills a woman and infects her dog. The movie is good enough that I didn’t question this until hours later, but I love how easily we accept leaps of movie logic like this. 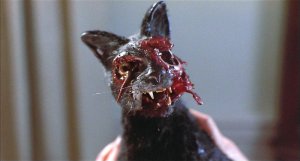 You can’t have a zombie dog without a zombie kitty.

The slugs have the bad taste to attack on homecoming night, when everyone is dressed to the nines in tuxes and dresses, which gives the final battle a delightfully surreal quality. That was one thing missing from the recent remake, Slither, which had Nathan Fillion as the cop and moved the setting to a rural town. I liked that movie, but it was a little too campy and the setting change didn’t help the movie at all.

A bus full of fratboy prom dates crashes into the janitor’s car- apparently the zombies can still drive at some point- and they all get infected, and siege the sorority house. Chris ain’t gonna let a horde of space zombies come between him and after-date backseat fumblings, so he teams up with the Detective to rescue the girls, shotgun and flamethrower in tow. 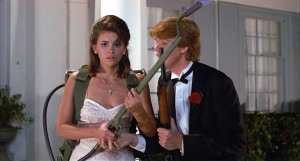 I’m sorry I forgot your corsage.

The movie has just enough humor to keep you distracted from the ridiculousness, and even if it’s just an excuse to have a third act full of zombies in tuxedos being shot and torched by girls in frilly dresses, it’s worth every minute. I’d really put this forgotten classic up there with Sixteen Candles and other treasures of the 80’s, in its own genre. After all, where else can you see headshots like this? 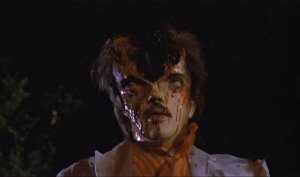 Daryl Hall also had a cameo, but his scene was cut.

One of the sorority girls was doing a science experiment with a bunch of animal brains in jars in the basement, and the brain slugs converge there, allowing them to be blown up at once- thankfully movie monsters tend to do this. And everyone lives happily ever after- or do they? The director originally wanted it to end with the Detective, who sacrifices himself to save humanity, shambling out of the flames, charred and infected, only to fall down and release a flood of slugs toward the cemetery. The aliens from the beginning show up to clean up their mess, and who knows what a sequel might have brought. Unfortunately he showed this to the producers before the effects were complete, and they made him put in a cheap scare ending, which isn’t the same. The film ends well, but it
would have been nice to bookend the story that way.

Youtube of course has the original ending!
I may poke fun at this movie, but I really enjoyed it, and wish I’d seen it back in the day. It’s criminal that it is not yet on DVD, especially since the remake was released 2 years ago. I know Slither didn’t make a ton of money, but it would have been ideal to release the original during that time, don’t you think? Apparently bootleg copies on ebay have the original ending as well, so maybe I’ll have to side with the pirates on this one.

Baby, you got real ugly.

Beers Required to Enjoy: None required, but had 1 anyway
Quotability Rating: Low
Cheese Factor: Medium
Could it be made today? It should be!
Gratuitous Boobs: A few nice sorority shower scenes.
High Points: Too many to list
Low Point: Tacked-on ending

The high-quality images were grabbed from Google Image search, but I found that they come from horrordvds.com‘s review of the movie, so here’s giving credit where it is due.