Skip to content
Home30 Days of Night, 2 hours of boring

The premise is a great B movie- vampires attack one of the northernmost oil outposts in Alaska during the long Arctic winter, when the sun disappears for 30 days. Imagine being trapped in a desolate wasteland of ice and snow shrouded in darkness, being hunted by hungry creatures of the night intent on feasting from the ragged, steaming slash of your torn out throat. Pretty scary, huh? Now instead imagine The Diary of Anne Frank with a bunch of Alaskans in the attic, and a bunch of loitering shark-faced emo kids as the Nazis, and you’ve got 30 Days of Night.

“Maybe we should start a diary.”

The vampires begin their onslaught as the town is preparing for its yearly shutdown. They burn up all the cell phones, kill all the sled dogs, and no one thinks anything is strange until a grimy Stranger in dire need of a toothbrush shows up at the bar muttering imprecations. He’s Ben Foster, slumming in a useless role. The sheriff (Josh Hartnett at his least interesting) locks him up, and then sits around until the power goes out. By then it’s too late. The vampires, shark-mouthed albinos who come out of nowhere and dress like Russian emigres, start pulling people under houses, out windows… all jump scare nonsense that creates zero tension. The vampires huddle around with their mouths open and hiss a lot; a much better movie with a toothy creature was Dead Birds. This one just expects them to be scary as they hulk around and stare. It does not work.

One impressive scene was the overhead shot of the vampires sullenly walking from victim to screaming victim in the snowy town, leaving bloody corpses in the snow. It has the quality of a painting, and was probably a 2-page spread in the graphic novel. The film looks very good, mostly; the CG snowstorms reminded me of Frank Miller’s inked snow in his “Sin City” stories, and director David Slade (Hard Candy) wisely gives us little color but black and red on the snowy backdrop.

Our plucky survivors hole up in an attic like Ann Frank, but we never see the vampires hunting for them anyway; they’re just out there whenever the plot requires it, such as when the Crazy Old Man wanders out , or they need batteries, or decide to move to a “better spot.” We later learn that vampires can smell our blood, but they don’t go sniffing around after they apparently slaughter the rest of the town on its first Day of Night; they just sort of loiter in the snow and stare, slack-jawed. You’d think after isolating a town you’d want to savor your 30 day killing spree. I guess frozen blood keeps.

Vampire, motherfucker! Do you speak it?

The whole middle of the film is intolerably boring except for a cliche attack as they go for supplies, where they have to kill an infected girl. The killer child has been scary since The Omen, and has been used in the also boring Interview with the Vampire. Here it’s reminiscent of the killer-kid opening in the superior Dawn of the Dead, which may not be better than Romero’s original, but is certainly better than this snoozer. It becomes apparent that the vamps can be killed with an axe, or a shot to the head, or UV grow lamps, or trucks, but only one guy decides to strike back. Beau Brower the mountain man (Marke Boone Jr., the grimy cop from Batman Begins) goes on a brief killing spree with the trencher we saw in the beginning of the film. It ends all too soon.

There’s a another good fight at the pumping station, and then the sheriff finds a dramatic and silly solution to their problem. The final fight is terribly anticlimactic, and we don’t care about the sacrifice our hero eventually makes, because we don’t care about him. Sure, he’s got his estranged wife the fire marshall trapped with him, but 30 days of hiding in attics isn’t enough to re-ignite the spark of their relationship. Sheriff also has a whiny younger brother who I wanted to be vampire fodder, but no such luck. 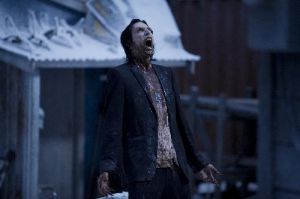 I really liked Hard Candy, but Slade utterly fails to create suspense, scares, or generate proper pacing here. The movie is 1 hour and 53 minutes long and you feel every second of it. They shoot day for night, which gives the town an eerie glow at times, but ruins any suspension of disbelief when the sun glares in the windows and no one has frosty breath, ever. These technical gaffes are minor compared to the unfocused and messy script that fuels it all. There’s about one chilling scene in the entire movie: “No God.”

No one will question why all the charred corpses are beheaded.

While I’ll agree with those who say it was refreshing to see monster vampires instead of the brooding whiners we’ve endured since Anne Rice wrote her homoerotic romance novels, declaring this anything more than mediocre really hammers the stake home: recent vampire stories have been pretty horrible. The little I’ve seen of the HBO series “True Blood” only convinces me that maybe the neck has run dry.