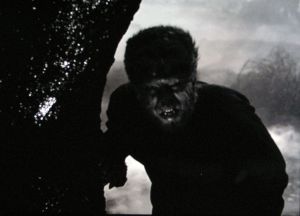 One of my favorite old horror films. At only 75 minutes, it creates a mythology out of the whole cloth, thanks to Curt Siodmak’s script and the naturalism of the cast. And what a cast. Lon Chaney Jr. embodies the practical everyman, horrified by what he becomes. His name is Larry Talbot, but the opening credits just call him The Wolf Man- so much for surprise, folks! Claude Rains, always excellent, plays his Dad back at the castle. He’s the perfect vehicle for the script to rationalize the fantastic goings-on, trying to explain them away with psychology. Claude has that superpower of classically trained actor: to say utter bullshit and have it come off as undeniable fact. 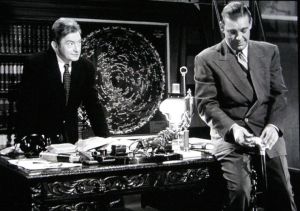 Larry returns home to inherit the family estate, and finds himself enamored with a local shopgirl named Gwen that he’s been spying on with a telescope. Stalking always works out so well in the movies, doesn’t it? He keeps pressuring her for a date and she relents, and they go visit the local Gypsy cart that has rolled into town. The gypsies are Bela Lugosi, playing a fortune teller imaginatively named Bela, and his mother, played by the always intense Maria Ouspenskaya, who fittingly enough was known as a giant pain in the ass on movie sets for remaining in constant contact with astrologers before she made any move. They didn’t warn her that she’d die of a stroke after setting the bed on fire with a cigarette, sadly. 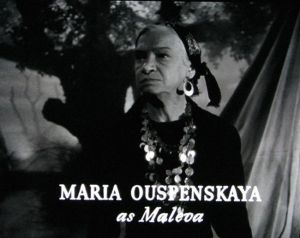 While they are waiting to get their fortune told, Gwen and Larry hear a woman scream and run to help, and he fights off a bloodthirsty wolf with his silver-topped cane. But not before he is wounded. The next morning no wolf corpse is found, but Bela’s is found instead, and Larry’s wound has disappeared… dun dun dunt!!! 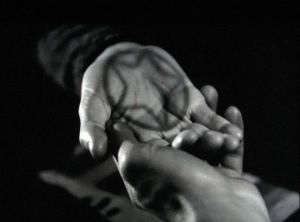 Okay, so the wolf man sounds like an angry Schnauzer, and looks like Robin Williams with a dental plate, but his curse was made iconic here. The infamous lines, “Even a man who is pure of heart and says his prayers at night, may become a wolf when the wolfbane blooms and the autumn moon is bright” would be more memorable than similar, earlier werewolf films like The Werewolf of London. That movie is delightfully droll and spawned a great song by Warren Zevon, but seeing the horror on Larry Talbot’s face as he feels himself transforming into a murderous creature is so empathic that the movie is elevated from a mere monster picture into the world of Jungian archetype. 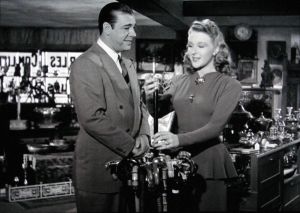 The film is quite short at 70 minutes, but doesn’t waste any time with romance, or unnecessary subplots. It’s the simple, tragic story of a man who knows he will destroy the woman he loves, and can do nothing about it. It has been endlessly copied, homaged, and spoofed- a testament to its enduring power and influence. An American Werewolf in London, The Curse of the Queerwolf, and Full Moon High– which I’ll be reviewing shortly- all owe their existence to this monster movie classic, and Lon Chaney Jr.’s uncanny ability to both play an easy-going everyman and a slavering beast under pounds of movie latex. 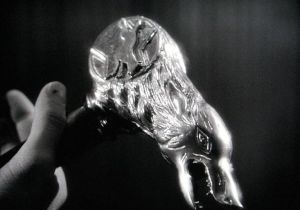 This goes on my favorite list as #8. It is being remade with Benicio del Toro in the Chaney role for next year, and I hope they do it justice. Jack Nicholson already did an interesting take in Mike Nichols’ Wolf, so something a bit more gory and campy would be refreshing. And yes, I know I’m a day behind on the marathon since I’m not counting the 8 movies I did mini-reviews of. Don’t worry, I’ll catch up. 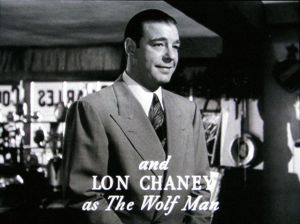 So much for suspense!