Skip to content
Home12. A Return to Salem’s Lot

Schlocktoberfest #12: A Return to Salem’s Lot

Following his nosedive into ’80s cheese, Larry Cohen of blaxploitation classic Black Caesar and offbeat horror like It’s Alive! changed his tone. He got campy and sarcastic, and began using B-movie slummer Michael Moriarty (Who’ll Stop the Rain) in everything. The third It’s Alive! entry was pretty bad, and I think it was made at the same time as this- some of the punk kid victims look the same! 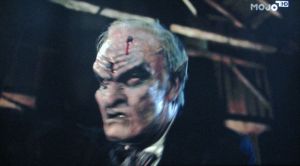 Anyway, Moriarty plays Joe, an asshole anthropologist dragged home by court order to take care of his asshole kid, and they head to the family mansion, in cozy Jerusalem’s Lot. Immediately the townsfolk give him the stinkeye, the sheriff warns him off, and when a car full of teenagers is stopped by the cops and set upon by hungry vampires, we find out the whole town is a vampire haven. When the surviving punk hides in Joe’s house, he takes her to see the judge and straighten things out, but the aged folks at the judge’s house just drag her into a room and suck her blood. Joe and his kid get to live because of their heritage- they are meant to be Drones, vampire servants, and Joe agrees to write the history of the vampires for the judge.

We learn that alongside the Puritans on the Mayflower, another ship came to America in 1620- the Speedwell, carrying a host of vampires. They settled in the little town of Jerusalem’s Lot up in Maine, and vampires in a small town is about all this has in common with the Salem’s Lot movie based on Stephen King’s novel. However, despite a tedious start it has its own charms- director Samuel Fuller- who made such classics as The Big Red One and Pickup on South Street– shows up and steals the show. 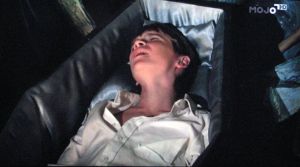 The first symptom of vampirism is a gay-ass open shirt.

Joe’s jerky kid goes off to play with a young girl and apparently they played Vampire Doctor because he starts to change. Joe tries to escape with his son before he is enslaved by the vampires, but they have the drones to stop him by day, and their own powers to trap him by night. Just when I’m thinking this is a steaming vampire turd, Samuel Fuller shows up as a nasty old man who’s lost. Joe tries to send him out of town to save him, but he keeps coming back- it turns out he’s a Nazi Hunter, and he doesn’t bring them to trial! He’s looking for a Nazi vampire, and he’s encountered the beasts before. Sure, it’s deus ex machina, but Fuller is so entertaining as the crabby old Jewish bad-ass that the movie suddenly becomes entertaining. 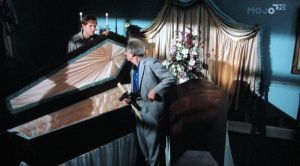 First we slay vampires, then we get Danish!

He turns the tide and helps Joe fight the vampire horde and their slaves. If the entire movie had been called Sam Fuller the Nazi Hunter vs. The Vampire Horde it would be fucking epic and a deserving cult classic, but the first two acts are pretty painful to get through. Fast forward until Sam Fuller and his snow-white Jew-fro show up waving stakes and a Luger, and you’ve got a fun campy vampire huntin’ yarn with coffins on fire, holy water burning faces off, and they even use a flagpole with Old Glory on it to send a vampire back to Hell. Half a great trash film, and half is just trash. Worth seeing if you like Sam Fuller or like vampire cheese.