A mall full of Johnny 5-alike security robots gone insane, stars Kelli Maroney- the ditzy sister from Night of the Comet– and best of all, is directed by Jim Wynorski, who’s best film is probably Return of the Swamp Thing, this is just the sort of ’80s trash I need to feed my soul.

Chopping Mall features Paul Bartel and Mary Woronov- Roger Corman vets and masterminds behind Eating Raoul and Death Race 2000– so it can’t be all bad. It helps that for scream queens we also have Rebecca Crampton, who got head from a head in Re-Animator, and Karrie Emerson as the tomboy gearhead who can fix cars, and hopefully fuck up killbots.

In the 80s we had beauty pageants at malls. No we didn’t!

We meet Paul & Mary- playing their cannibalistic characters from Eating Raoul– as they attend a demonstration of security robots. The robots chase down a thief and taser the shit out of him, but when shown a security pass, leave you alone. Like all technology in the ’80s, they are commanded from a control center run by nerds in white labcoats. And as we meet our teen robot fodder- Alison (Kelly Maroney) the new girl at the pizza place, Nerdy Ferdy who’s guaranteed not to be a total slime beast, his feather-tressed jock pals, and the aforementioned scream queens- lightning strikes the computers running the robots, and since this was before surge protectors, they turn into malevolent murder machines.

That’s why it is imperative that all your electronics have surge protectors, and you only use Monster cables. They cost ridiculously more, but if you’ve seen Chopping Mall and Maximum Overdrive, you know that they are just waiting to turn you to mincemeat and take over the planet. So it’s a total bargain. The dude at Best Buy totally saved my ass with that info. It doesn’t take long for the Killbots- which was the film’s original title, before they came up with the punny replacement- to kill their nerdy keepers and begin patrolling the mall, with the new prime directive of Kill All Humans. 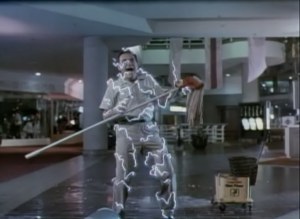 The Killbots are also cockblockers, and interrupt poor Ferdy from getting anywhere with Alison. Of course the jocks get their easy poontang, which seals their fate in movies like this. Killers can smell sex, even if they’re killbots. And they seek those targets first. Unlucky for the big titty girl whose name I can’t recall, and her jock douche boyfriend. He gets it first, when the robots use their gripper claws- which suspiciously look like those grabbers sold to short and old people on infomercials- to tear his throat out. Tittygirl #1 flees in terror, and we learn that the robots not only have tasers but LASERs, which they shoot her in the ass with. I am not kidding. There’s a little spank-mark on her undies where the laser seared her buns. The movie doesn’t skimp on the blood or the boobs, and as her friends watch in horror, her head gets blown off. It’s no Scanners but it was impressive, and unexpected.

From then on it’s a free-for-all, and the killbots go on a blasting spree. But this is a red-blooded American chopping mall, which means there’s plenty of weaponry to fight back with. The boys head to the gun store and the girls go through the heating ducts to a department store, and go for the lighter fluid. Grillin’ and killin’ the American way! The robots look like they’re made of cheap plastic, but they soon turn out to be bulletproof bad-asses, which even such iconic totems as the 12 gauge and .357 Magnum cannot damage. And the mantra of “kill it with fire!” gets turned back on the teens themselves.

You’ll notice that the worst deaths are given to the girls, in true exploitation fashion. Sure, we see a janitor- the ubiquitous Dick Miller no less- get electrocuted, and a guy gets thrown off a railing, but the girls get their heads exploded and burned alive. Only the tomboy Linda escapes, probably because the director thought she was a lesbian. The kids try everything from propane tanks, fire extinguishers, and the ever popular one-liner in their fight, but soon only Alison remains. She’s got experience from Night of the Comet, where she fought space dust zombies, so she manages to trap a robot in a paint store- apparently the explosive kind- and kill it with a road flare and using the robot’s own catchphrase against it.

Overall, Chopping Mall is a bit low-budget and sleazy, definitely not in the same realm as classics like Night of the Creeps. But it manages to be funny and gory, and get a few zingers in there. Ferdy is played by Tony O’Dell, the most annoying of the Cobra Kai in The Karate Kid, Part II. I was quite amazed with his ability to play a non-douche in this film. It is a sad thing that he has retired from acting, swept from the cast lists much like Daniel-san’s leg. The robots are a bit cheesy-looking, but so were the H-K’s in Terminator 3, so I can’t hold that against it. This is solid ’80s horror sleaze that will titillate you and not make you feel so dirty you search for a sani-wipe.