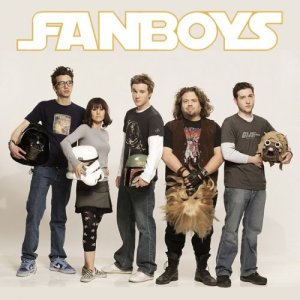 We all know one. You might even be one. The fanboy: the person who doesn’t just like something, but goes that extra parsec and lives it. We’ve all seen the Star Wars fans who waited in line for days to catch the midnight premieres, dressed in costumes, living in tents. This is a story about guys even crazier than that, who want to go to George Lucas’s Skywalker Ranch and steal the print, so their dying buddy can see it before he goes to a galaxy far, far away. Whether you are a fanboy, know one, or just like making fun of them, Fanboys is pretty entertaining just as a buddy road trip movie- the nerd stuff is just gravy. 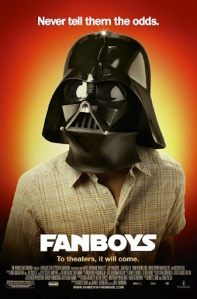 The saga begins in ’98, a few months before the new Star Wars movie, The Phantom Menace, is to be released. Three nerd buddies show up at a Halloween party dressed as Darth Vader and two stormtroopers, like they do every year. When you spend that kind of time and money on a costume, you need to get some mileage out of it. They are Hutch (Dan Fogler, Balls of Fury) who has the Shag Van and lives in his mom’s garage- I mean Carriage House; Windows who runs the town comic book shop (Jay Baruchel, who seems to have parlayed his ability to mimic Chewbacca in Knocked Up into this bigger role), and Linus, who’s got terminal cancer, but hasn’t lost his hair yet. They’re having fun until Linus sees Eric- his old high school buddy who was gonna draw comic books with him until reality dragged him away to Dad’s car dealership. 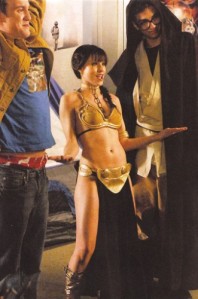 Eric misses his pals, and seeing them again makes him dread the daily drudgery and his douchey older brother at the dealership even more than usual. So when he hears of Hutch and Windows’ idiotic plan to raid Skywalker Ranch and snag a workprint of the new Star Wars film so Linus can see it before he dies, Eric is lured to the dark side. Windows is cybering with a “girl” in a chatroom who has a contact inside the ranch, so they hatch a plan to sneak in and grab the film. Remember this is ’98, he’s constantly lugging an old Toughbook and looking for phone jacks.

Once they hit the road the laughs are pretty solid, whether it’s Hutch’s Millennium Falconesque ’70s shag-van, their continual war on Trekkies, or the acerbic comments of Zoe (Kristen Bell, “Gossip Girl,” Spartan) the clerk at Windows’ comic book store. She’s the spunky Leia of the film, gone brunette and feisty. Together the gang has solid comic energy between her sharp tongue, Hutch’s perversity, Windows exasperated haplessness, and Eric and Linus as the straight men. Their adventures lead them to a hilarious clash with Jabba the Hutt (Harry Knowles, impersonated perfectly by Ethan Suplee of “My Name is Earl”), a hive of scum and villainy led by Danny Trejo, and a band of Trekkies led by Seth Rogen in one of his more self-effacing roles. 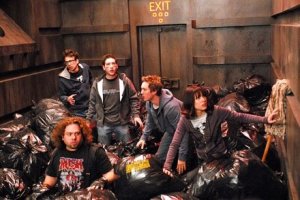 They use their cameos wisely, and don’t lay on the in-jokes too thick- there’s plenty to laugh at if you’re only peripherally aware of Star Wars. I saw it after a foray into NYC Comicon, and the theater was only a few blocks away, so the audience was full of folks who saw a lot of themselves up on the screen. And we all loved it. Just don’t go in expecting a classic- this is somewhere in the big spread between Detroit Rock City and Role Models, and the humor is similar to both. If you’ve been following the sordid tale of the movie’s attempts at re-cutting by the Weinsteins, be assured that this is no Lucas puff piece, and while we never get to see what the fanboys think of The Phantom Menace, they do ponder, “What if it sucks?” But they recall the new hope and anticipation we all had for it, and made a good comedy about it.