Skip to content
HomeLillian Randolph: Erased from Tom and Jerry 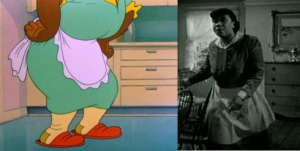 Many of us grew up watching Tom & Jerry on the tube, but if you’re old enough you remember the day Tom’s owner changed from a snarky black woman to a strident Irishwoman. Tom’s owner was never named, but she was called “Mammy Two Shoes” by some viewers. Some called her “the maid” when it was obvious that Tom lived in her home. Later, MGM had her legs whitened and her voice re-dubbed by June Foray as an Irish stereotype. The original voice, by black actress Lillian Randolph, was rarely heard again. Randolph was a blues singer who had roles in radio and in It’s a Wonderful Life. 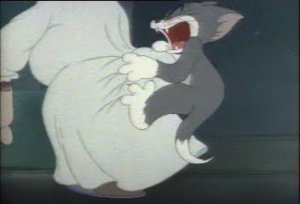 One of my faves- Fraidy Cat, where Tom mistakes her for a ghost

As a child, I remember seeing some of the cartoons before the axe fell. I never thought she was a maid, and there are very few shorts that put her in a maid outfit- she’s usually in a slipper and housecoat, like a single woman reclining after a long day. In fact, in Mouse Cleaning, you can see her dressed up to go to church. That’s one of the few shorts where you get a glimpse of her face, albeit from a steep angle and her hefty bosom blocks most of it. The other banned cartoon, Casanova Cat, is the only one I recall her being in a maid outfit- it’s a fantasy short where Tom goes to call on his white cat beau, who lives in a penthouse. 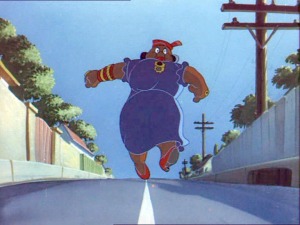 She does have a caricatured manner of speech, as when she tells Tom, “if you is a mouse catcher, then I am Lana Turner! Which I ain’t.” The NAACP complained about the stereotypical portrayal and MGM removed her entirely in 1949. Lillian Randolph went back to being a blues singer.

She’s an offensive caricature, no more so than the ubiquitous blackface gags that other cartoons of the time had. Anyone can see why she became the subject of complaints, once you start noticing the shabbiness of the house, and her mannerisms. 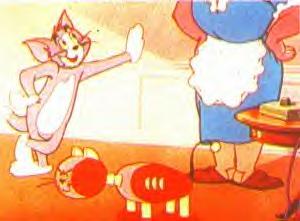 The Tom & Jerry shorts won more Academy Awards than Disney’s or Warner Brothers’, but I feel they jumped the shark when Chuck Jones came along and reworked the characters. I like Chuck- Hell, I have a tattoo of Pepe le Pew in an undisclosed location– but his Tom & Jerry are way too much like a mute Sylvester and Tweety. They lack the great character of the originals, where Jerry was a tiny Chaplin tramp and Tom was lazy and only chased Jerry when his owner threatened him with sleeping outside. My favorite of all time is perhaps Heavenly Puss, where Tom loses his 9th life and is going to Cat Hell unless Jerry signs an affadavit forgiving him for all his trespasses. It deservingly won the Oscar that year. 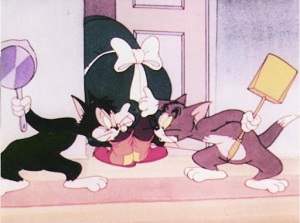 You can find many of the original cartoons on youtube, and MGM has released most of them in original form in the Tom & Jerry Spotlight Collection DVD sets. The third set omits two cartoons- Mouse Cleaning and Casanova Cat- and several are edited. They finally released some of the originals and we can all see Tom’s owner as she originally was. If you love the old cartoons, I recommend looking up the originals on YouTube or DVD to see the lost performances of Lillian Randolph.

2 thoughts on “Lillian Randolph: Erased from Tom and Jerry”