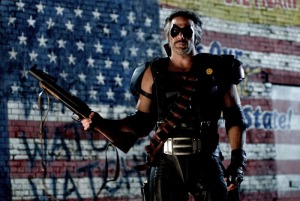 As a fan of the comics, and of Zack Snyder’s previous 300 and Dawn of the Dead, I decided to go to a midnight showing of Watchmen last night. And let me get this out of the way- I’m no purist, and I think it is an excellent adaptation of some difficult material. Clocking in at 2 hours 45 minutes, Snyder and company have put Alan Moore and Dave Gibbons’ paragon of graphic novels into film format, and it is an incredible cinema experience.

From the opening scene, where an old washed-up attack dog for the government is assassinated- seen in the trailer so no spoilers- to the credit roll where we’re introduced to the story’s alternate 1985 where Richard Nixon is still President, superheroes helped us win Vietnam, and were eventually outlawed in the wake of public protest- makes the tale accessible to those unfamiliar with the graphic novel. From then on, we’re with Rorschach- the masked, trenchcoated vigilante who refuses to drop his mask and give up fighting crime. He begins investigating the murder- the victim turns out to be a supposedly retired hero named The Comedian- and unravels a plot that might culminate in World War 3.

Rorshach (Jackie Earle Haley, Little Children) warns his retired associates, because he thinks “someone is murdering masks.” They include the reclusive, nerdy tinkerer Dan (Patrick Wilson, Hard Candy), who was once a Batman-esque vigilante called Nite Owl, patrolling the city in a hovering ship; Sally Jupiter (Malin Akerman, 27 Dresses), a slinky martial artist who took up the mask after her mother retired as the Silk Spectre; Adrian Veidt, “the smartest man in the world,” a billionaire who seeks to elevate humanity, but once fought crime as Ozymandias. Then there’s the one who’s not like the others- Dr. Manhattan (Billy Crudup), a nuclear scientist who after a tragic accident, became a blue-hued living god, able to see and control the world on the quantum level.

As Rorschach follows the clues, the Doomsday Clock is ticking. The world is on the brink of nuclear war, and the United States has been very cocky with Dr. Manhattan as its ally. He can disassemble nukes in flight, and survive a blast. He’s both not there, and everywhere at once. We see him and the Comedian in flashback, winning Vietnam, as a maniac with a flamethrower and a towering blue giant dissolving enemies into atoms. Sally and Dan bond over missing the old days, and we learn that they both wear the mantles of the first generation of superheroes. As Rorschach homes in, the plot is bigger than they first imagined, and soon they are all drawn in to fight as the world teeters on the brink of apocalypse- with its blue savior in self-imposed exile.

The movie, like the comics, deftly melds the dark brutality of Rorschach’s world as Travis Bickle from Taxi Driver in a mask and The Comedian with a shotgun, with the “good clean fun” of Nite Owl and Silk Spectre in form-fitting suits kicking criminal butt, and the otherworldly godlike powers of Dr. Manhattan. They are archetypes for superheroes we all know- Batman, Silver Surfer, the Punisher, The Question. Alan Moore’s story is as much about the history of comics as it is about its plot, and the bones are still there. Snyder perhaps lingers a bit too much on the sex and violence- there’s a hilarious yet kinky sex scene, as true to the comics as possible- but the film looks incredible, even without IMAX. And Dr. Manhattan’s blue dingus is there in every scene, wagging hypnotically and causing titters among the nerds.

The story is big, about whether it is necessary to destroy the world in order to save it; if humanity’s penchant for destruction can ever be tamed, or if our genetic destiny must lead us toward apocalypse. Dr. Manhattan’s musings on the nature of the universe, and what constitutes a miracle when he can turn air to gold if he so wishes, are poetic and transcend the material. This is a great story born to be sequential comic art, but translated to 24 frames per second with aplomb. The Dark Knight took the superhero story to epic thriller levels worthy of Michael Mann; Watchmen is an even bigger story, asking us why we think we need superheroes: To save us from ourselves. 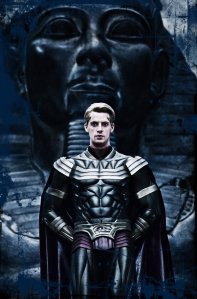 The casting and acting is across the board excellent. I had many reservations with some of the choices, especially of Malin Akerman and Matthew Goode, but I as never brought of the spell the movie casts. Jackie Earle Haley, between this and his polar opposite playing a child molester in Little Children, will hopefully continue to rise as a late star. He is Rorschach, and when finally unmasked, is even better. Billy Crudup takes an incredible subtle, emotionless character and makes him enthralling. Jeffrey Dean Morgan’s Comedian embodies the complex, vicious character to the core; you hate him, but you can’t stop watching him, and Carla Gugino (American Gangster) plays the older Silk Spectre with perfection, young and old- she’s a somewhat creepy aged starlet who demands a lot from her daughter and made some decisions she refuses to regret.

You’ll hear the usual nerd rage from the basements of America decrying the changes made to the story- one big one at the end- but honestly, I think it’s an improvement. Discussing it without spoilers, I think it was wise to change the villain, to remove humanity’s crutch. And even Alan Moore should agree it was an inspired choice, if he stops picking bones out of his beard between rants long enough. It lives up to the hype, and while it may demand complete attention from neophytes on first viewing, it is a rich tapestry that will reward future viewings.

One thought on “Watchmen: New and Improved”