As part of my quest to see all of Arnold Schwarzenegger’s films, I dipped back to his first big role- Stay Hungry, with Jeff Bridges. He plays a bodybuilder named Joe Santo, who even wears a Mexican wrestling mask sometimes, like Santo of film lore. It’s not really an Arnold film, but he plays a major part and doesn’t use his “Arnold” persona at all- he’s in the gym working out a lot, and gets to be himself.

Jeff Bridges is Craig “Buck” Blake, an idle southern gentleman whose family wants him to make something of himself; but the movie isn’t so much about plot as the mood of its era, and character. He’s been whiling away his inheritance by big game hunting, escaping to the wilderness, and playing the part of the dilettante. Willie the house servant, played by Scatman Crothers, ups and quits over Buck’s shenanigans. 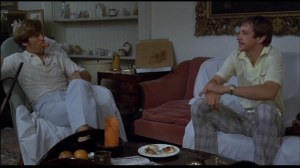 Craig becomes good friends with Joe and his girlfriend Mary Tate (Sally Field) in this freewheeling ’70s tale of the joys of shunting responsibility to just “be.” Directed by Bob Rafelson of Five Easy Pieces fame, and written by Charles Gaines of Pumping Iron, you get a comfortable melding of the two. Joe Santo, the bodybuilder who runs Olympia Gym, is played cool and collected by Arnold; he has great challenges ahead, but he takes them in stride, and is always broadening his horizons- playing the fiddle with some backwoods boys, letting Mary Tate have a fling with Craig- he has a Zen-like philosophy, from which the film takes its title. Craig on the other hand, avoids all responsibility, and when he tries to involve his friends with his family and their southern gentility, is boorish and self-absorbed. 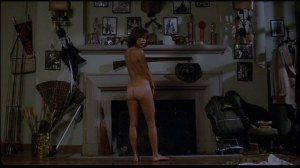 Sally Field is excellent as Mary Tate, who doesn’t want to be “another trophy on Craig’s wall,” or one in Santo’s trophy case either. In ’70s movies women often got the short end of the stick- this was the era where angry young men fought for civil rights, and then told the “girls” they could help by getting coffee and maybe doing the typing. The movie isn’t about that either- it’s about making something of yourself. Craig’s one confidante in his family is Uncle Albert (character actor Woodrow Parfey) who tells him this gem of advice: “To make something useful out of a life, it doesn’t matter what you do. Just that you do something, and do it unsparingly.” He then adds, “Why don’t you shit or get off the pot?”

I refuse to do your dirty work, no more…

The movie is full of grotesques, and setting it in a bodybuilding gym where the sport of sculpting one’s own body was only just being accepted in mainstream society was a perfect move. Arnold’s Joe Santo appears as a Rennaissance Man, surrounded by misfits and pikers. One is a manic Robert Englund- aka Freddy Krueger- who plays a hyper yet likeable gym member. Another is the gym owner Thor (R.G. Armstrong) a randy old man with a toupee and a penchant for poppers, and his right-hand man, a black bodybuilder he doesn’t know is gay.

The weakest part of the movie is the shoehorned plot regarding mob boys wanting a “deal” with Thor and Craig; it’s unnecessary and out of place, but leads to Craig’s belated coming of age, when he comes to Mary Tate’s rescue. And some of the funniest scenes, as Thor finds novel uses for the gym equipment when the gangsters drop off some hookers to sweeten the deal; the same benches become a battlefield for the end scene, as the film spirals into absurdity. Santo is competing for Mr. Universe, while Craig is saving Mary Tate- with the help of all the bodybuilders who already competed. The famous shot of the muscle men posing on tops of buses, and running down the street, posing and flexing, comes from here. It’s Rafelson’s nod to Fellini’s parades of grotesques, I guess, and it helps deflate the unnecessary drama.

Another one rides the bus

Overall this is a fine piece of ’70s cinema for fans of Jeff Bridges and Sally Field, and if you want to see Arnold play a part completely straight. Though he does get asked by an interviewer if bodybuilders are homosexual. “No, I can only speak for myself, but if you want me to prove it…” I wonder if Arnold ad-libbed that one, since it could be right out of Pumping Iron outtakes. Things do get a little pretentious, but we do get Joe Santo’s message: “You’ve got to stay hungry. You can’t grow without burning.” And Arnold delivers it with panache.

As much as I like watching him blow things up and then spout awkward puns, I like to wonder what his career would have been like without it. The scene in Total Recall where the two sides of his character talk to each other must not have been too hard for Arnold to pull off. Arnold won a Golden Globe for Best Acting Debut for this film, but didn’t get another memorable role until he became Conan.

And while Sally Field only bares her bottom, the scene with the busty hooker trying to seduce the gay masseur is pretty funny- but she’s quite a looker too.