Got a late start on this one, but Raquel over at the excellent Out of the Past movie blog- named for that awesome Robert Mitchum noir but so varied in scope that you’ve always got something interesting to read- is reviewing many of the movies on Turner Classic’s marathon of Latino Images in Film. Now I’m not Latino, I’m of Italian & Irish descent, but I get mistaken so much- as evidenced by Latino restaurateurs insistence on addressing me in Spanish, then looking puzzled when I say I can’t speak it- that I feel that I can speak about issues such as “brown face” as Raquel calls it. Because if I were an actor in the ’40s, I’d probably be doing it.

I’ve always been fascinated with old Hollywood’s treatment of race; it began with theater, when Shakespeare would have actors cross-dress, and do you think he got a Moor to play Othello? That carried over, and in high school I got my first look at insidious prejudice when a theater troupe came to perform Romeo & Juliet for us. Romeo was played by a big black dude who’d have made a great Othello, and I thought he did a great job, but my classmates couldn’t get over his race. This was the era of “reverse racism,” when Clinton was about to be elected, and whitey was scared. If a black guy can play Romeo, how come Charlton Heston can’t play a Mexican in Orson Welles’s Touch of Evil? Well, no one wants to erase Charlton and use CG to put in Jimmy Smits for crying out loud. I think Welles, with his theater background, who had played Othello himself, was a product of his times. He wanted the best performance, and meant no disrespect. He just wasn’t enlightened enough. It’s still one of my favorite films, but it’s a sure improvement to hear filmgoers complain about Heston in brownface, and not carp on Baz Luhrmann using Harold “Waaaaalt!” Perrineau as Mercutio in Romeo + Juliet.

“Says here you immigrated from the Planet of the Apes.”

I’m most interested in seeing these:
Salt of the Earth (1954), a docudrama about a New Mexico miner’s strike that was mired in the shameful House Un-American Activities Committee hearings. This film shows how progressive Hollywood was getting after the Code made things child-safe in the mid-30s, only to be smacked down by another witch hunt. The Mexican-American workers are striking for equal wages, and the film follows the effects on them and their families at home.

Terror in a Texas Town (1958) which stars the always-excellent Sterling Hayden in even-whiter-face as a Swede whaler who fights a greedy rancher who killed his Paw. I’m assuming this is in the series because Eugene Martin plays Pepe Mirada. I love Hayden, and the script is by that other blacklisted pinko Dalton Trumbo, whose talents are well-known, so this is worth watching. Let’s see how Trumbo writes the Mexican characters- patronizing, condescending, or believable? Plus, I hear Sterling kills with a harpoon in this. A western with harpoons? Cool. 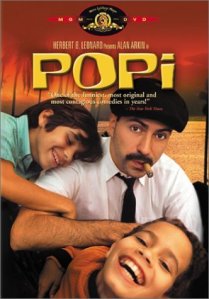 Popi (1969) I love Alan Arkin, and we watched this a lot as children in the ’70s. We were too young to wonder why Arkin- who also played *cough* Bean in Freebie and the Bean (full review)- was doing “brown face” or to think about the poverty of Spanish Harlem. We did know that a lot of Cuban refugees were coming over on boats and that’s why Popi- a Puerto Rican immigrant working 3 jobs to support his children- comes up with his crazy scheme to pass the kids off as Cuban refugees seeking asylum. I wonder why TCM didn’t also choose Freebie and the Bean, where Arkin plays a Mexican-American cop with a temper, arguing with his wife when he’s not saying “let’s get a taco.” (Yes, that’s where the line in Reservoir Dogs comes from). Well, actually I do- it’s pretty offensive, hearing him called “Bean” the whole time. It’s been ages since I’ve seen Popi and I want to see if it’s any better.

Thankfully nowadays instead of suffering through brown-face, we’ve gone full swing- now Italian-Americans are portrayed by Latino actors. Andy Garcia being called a “stinkin’ wop” by Sean Connery in The Untouchables, John Leguizamo as Vinny in Spike Lee’s Summer of Sam are two examples. Now we just need Hollywood to understand that we don’t need movies with more ethnic roles, we just need to realize that Leguizamo doesn’t need to do “pasta face,” he can play any character. This is America, we don’t need to make excuses for ethnicity like in Jean-Claude Van Damme movies! “How come he’s got a French accent? Um, he’s a cop from Quebec, on vacation, when uh, terrorists strike! 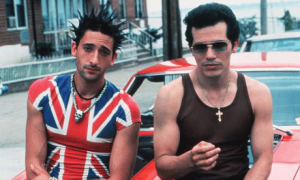 We’re slowly seeing that happen now that casting directors are more enlightened. At least Leading Man’s Ethnic Comic Relief Pal is better than Gang Member or Mechanic at Shady Body Shop. That’s about as lame as making every token Asian character a tourist or laundry owner. In New York City, the Chinese run the taco shops now anyway. It does bug me that some of my favorite actors like Luis Guzmán are often relegated to the same kind of role, so the problem still exists. But no one ever complains about Al Pacino as Tony Montana in Scarface, or Cesar Romeo in whiteface as …. the Joker! Those are funny now. But Hollywood needs to stop worrying about what will play in the Walmart belt. “Ethnic” people live there too. All Americans were “ethnic” once!

One thought on “Latino Images in Film on Turner Classic Movies”