I was one of the few people who was surprised that after Jimmy Kimmel and Adam Carolla left The Man Show, that Jimmy Kimmel was the one who got his own show. I always found Adam funnier, and I still do. I liked his reality show about remodeling his childhood house, so when I heard of his boxing rom-com called The Hammer, I had to watch it. 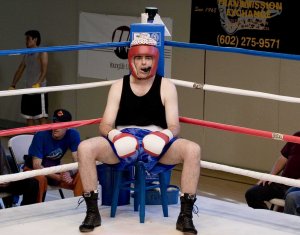 Enjoying movies depends a lot on expectations, and I knew what to expect from Carolla- self-deprecating humor, low-key laughs and occasional bizarre comments, with lots of reference to construction sites and hardware stores. If you go in expecting a laugh riot, you’ll be disappointed- but if you like Carolla, you’ll be satisfied. He doesn’t reach for the sky here, but he makes an enjoyable formula film, about the underdog going for the gold and the girl. It’s about as good as Run Fatboy Run with Simon Pegg was- not their best, but reliable and good couch fodder. 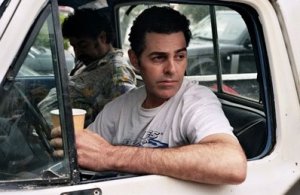 Carolla plays Jerry, a sad sack construction worker with his best bud Ossie- his Sancho Panza from his reality show. In one bad day, he loses his job and his girlfriend, and thus starts helping train fighters at his friend’s gym to work the stress out. Turns out his old nickname was The Hammer, and when he pairs up with a tough guy boxer after some trash talk, he knocks him on his ass. So he starts working toward the Olympics light heavyweight. 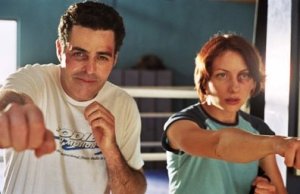 There he meets Lindsay, a defense lawyer looking for a workout and some moves in case her clients get rapey on her. She’s played by the perky Heather Juergensen of Kissing Jessica Stein, which also shares the same director as this movie. They get along well, and his sense of humor reels her in, even though he drives a shitty pickup truck that you have to bungee the passenger door closed on. When the door flies open, he swerves the truck to close the door. It’s little touches like that which elevate this from typical Rocky-formula comedy mixed with typical rom-com. 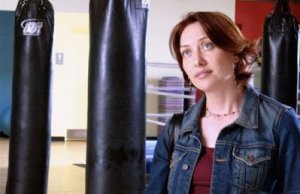 The movie wins on its genuine blue collar sensibility. Anyone who’s boxed knows that the movie knows its stuff, and have felt like Jerry does when he says he’s gassed, or when he surprises himself by winning. Carolla’s humor pokes fun at lazy guys like himself, Los Angeles- he and Lindsay have a date at the La Brea Tar Pits- and slow drivers. He has a gift for rambling and rants, somewhere between Lewis Black and Jerry Seinfeld, and the movie makes great use of it. He knows how guys compete, even when they’re friendly, and he knows that obsessing on sports or power tools is not much different than knowing everything about Star Wars.

There are some nice small parts that fill things out. Jane Lynch verbally spars with him in line at the hardware store, and she’s dependable as usual. Ossie from “The Adam Carolla Project” is naturally hilarious, with his genuine smiles as he accidentally sabotages Jerry at every turn. Of course Jerry has to face his greatest opponent for the final fight, but the movie makes it realistic. It’s something every boxing fan’s seen, so it feels legit- the fast fighter dancing away from the heavy hitter to win on points. Can the Hammer sneak one in and knock the guy out?

Let me tell you the movie surprised me. I went in expecting a lot less than what I got. I think it’ll surprise you too. This one’s definitely worth a viewing if you like Carolla at all. He spent $300,000 of his own money to get this into theaters, since the studio was going to put it direct to DVD. He believed in it, and it shows. I’m not sure I’d have ponied up cash as an investor to help him do it, but if it played in New York he would have gotten my $10 ticket and I would not have felt gypped. The MPAA also screwed this touching, cute movie with an R rating for two non-sexual f-bombs that I barely even noticed. Hey MPAA, fuck you.

One thought on “The Hammer”