Producer Philip D’Antoni gave us three kick-ass cop movies with car chases- Bullitt, The French Connection, and the lesser known The Seven-Ups. About a secret squad of elite police so named because the crooks they catch are guaranteed to be up for 7 or more years in prison, it stars Roy Scheider as the de facto leader of the squad. Reprising his role as Buddy Russo from French Connection, this is his turn to shine. And while this movie is not as groundbreaking as the story of Popeye Doyle, and is directed by D’Antoni himself, it is still one of the best cop movies of the ’70s.

The movie begins with a comic touch- Buddy and his crew are undercover at an antique shop that serves as a drug drop. They distract the owner by clumsily destroying half of the store through slapstick and pratfalls, until uniformed cops come to break things up, and find the dope. It’s a bit silly and uncharacteristic from the rest of the film’s gritty realism, so bear with it, it’s over quick. The real plot involves a pair of crooks who rob and kidnap mobsters for ransom- risky business. This puts the mob on edge, and when they find an undercover cop wearing a wire, they beat him up and think he’s one of the crooks, so they bring him in the trunk to try for a trade, but it all goes pear-shaped. 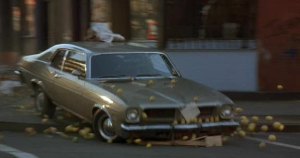 And when you kill one of the Seven-Ups, you’re gonna get hit back hard. Today, we frown upon things like torturing suspects in their hospital beds by squeezing their oxygen tubes, or breaking into a mob boss’s home and holding a shard of glass to his wife’s throat to make him talk. But in the ’70s, that was edgy and innovative police work! It’s a long way from picking your feet in Poughkeepsie, but this movie is all about the action sequences, and you can easily overlook its faults for how good they are. 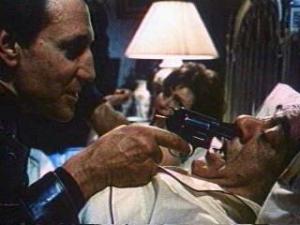 The hits on the mob are classic- they get one guy as he goes through a car wash, by locking his suicide doors closed with handcuffs so they can crowbar the trunk open and take the cash, without returning the hostage. But once the Seven-Ups get involved these tough crooks have met their match. Scheider gets in a car chase across uptown Manhattan, including a blistering run up Riverside Drive to the George Washington Bridge. They somehow end up across the Tappan Zee again, but we’ll forgive the geography errors. There’s a great sequence where the bad guys hide behind a bus with shotguns ready, and a great crash under a flatbed. The chase is as lively as those of French Connection and Bullitt, but the movie itself isn’t as groundbreaking.

As much as I love Roy Scheider, the script is more of a standard, if gritty thriller. The stunning ending to French Connection and Gene Hackman’s Popeye Doyle, or Steve McQueen’s ultra-cool hip cop and the insane speeds he took that Mustang 390GT too simply overshadow this solid NYPD crime film. I must say that it is a lot better than French Connection II however. Frankenheimer should have stuck to his strengths. If you enjoy ’70s crime films, this is one of the forgotten classics, and is worth hunting down. It’s the only film D’Antoni directed, and while he is a bit indulgent in the opening sequence, once we get to the meat of the story he shows promise. We sould use him today, as car movies are pretty lame these days.

3 thoughts on “The Seven-Ups”