Skip to content
Home80s Trash of the Week: Ghostbusters 2

I’ve managed to avoid watching this money-grubbing exercise in sequelry for 20 years, but after the news that Bill Murray, Harold Ramis and Dan Aykroyd are finally coming together to make a third entry, I decided to do it. Ghostbusters II isn’t the worst sequel of an ’80s classic (cough, Caddyshack II) but it definitely loses sight of what made the original great, and seems to have helped herald in the lame feel-good era of the early ’90s.

It seems that as soon as the Prez said “a kinder, gentler nation” back in the late ’80s, movies- perhaps also influenced by the new PG-13 rating- had to have a certain … perkiness. Probably best evidenced by the works of Robert Zemeckis and Joe Dante, highly mimicked but never properly replicated, movies got a cartoonish and affected screwball quality, as if made from bad molds of Peter Bogdanovich’s What’s Up, Doc? It would culminate in 1994’s North, best eviscerated by Roger Ebert in his infamous review.

Peter MacNicol is the best part of the movie; he began with next week’s ’80s pick, Dragonslayer, and went on to Sophie’s Choice and Ally McBeal. Here he plays an art historian with a hilariously contrived accent who gets possessed by an evil painting of Vigo the Carpathian, sort of a Vlad the Impaler without the vampire stuff. The Ghostbusters are split up and New York forgot all the ghosts from the first movie, and call them frauds; plus the City sued them for property damage and banned them from ghostbustin’. Ray runs an occult book shop on St. Mark’s, Venkman hosts a late night cable access paranormal show, and Egon is performing his trademark experiments that veer toward mad science. They get brought back together when Dana’s baby carriage takes a solo ride down First Avenue. 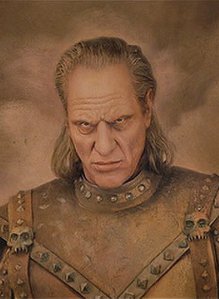 She’s been divorced from Peter- divorce being the ubiquitous subject of movies of this period- and has their baby Oscar but little contact with wacky Venkman, who Murray portrays with his trademark ’80s cokehead glee. I was always more a fan of his somewhat hapless self from Stripes; seeing him as an invincible Bugs Bunny type made him less fun for me. Of course, he was perfect in the original Ghostbusters, but here with family issues he’s a bit less enjoyable. Thankfully Ernie Hudson, Rick Moranis, Sigourney Weaver and Annie Potts all return and are quite good. William “Dickless” Atherton is unfortunately replaced by a snarky mayor’s aide who’s not up to the task. Atherton was also the reporter in the Die Hard films; he’s a tough act to follow.

It’s the plot that sinks the movie, and Murray himself said it best- too much slime and not enough “us.” He’s right. The slime river beneath the city gets too much screen time, even though the fact that it runs through the urban-legendary remains of the Pneumatic Beach Transit line from 1870 is a pretty sharp bit of screenwriting; it also vaguely mentions the Malbone Street Wreck, the worst accident in subway history, when a ghost train barrels through. But back to the story: Vigo wants to come back, and chooses Baby Oscar as his vessel. Sort of like how Indiana Jones and the Temple of Doom couldn’t balance the horror of child slavery with the kid-pandering of Short Round, the Baby Oscar in Peril scenes don’t seem to fit in a sequel to a movie where the bad guy was a marshmallow man summoned forth by a naked bubbly Sheena Easton.

In the end, the mood slime is lame; New York’s bad vibes come from the river of pink goo infused with Vigo’s ancient evil, not because it’s full of entitled, geo-centric materialistic egotists. Scrooged, another Bill Murray mistake, manages to somehow be less cloying. Even the ghost montage- a favorite from the first movie- is disappointing. This time the Titanic returns, forgettable except for a brief Cheech Marin cameo as a dock worker. The ghosts are more angry looking than Slimer, who makes a quick cameo as well. A fur coat comes to life; some Harryhausenesque ghouls haunt the Washington Square arch; and some executed criminals haunt a judge, but nothing as imaginative as the library ghost in the first movie, or as funny as Sigourney Weaver possessed by Zuul. She has little to do except play it straight here, and Moranis gets kissy with Annie Potts, and never recaptures the hilarity as Vinz Klortho the Keymaster of Gozer. 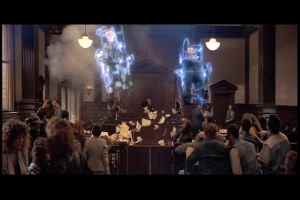 The centerpiece of the film is how they try to top the Stay-Pufft Marshmallow Man, by soaking the Statue of Liberty in happy pink goo and playing soul so she’ll boogie down First Avenue and smash her way into the Museum of Art, where Vigo has Sigourney and the baby. It looks cool, but it seems too big. Trading in the proton packs for Happy Slime Jizzer Guns, too many nods to fans of the toys and cartoons, cutsey babies and a fifth wheel Ghostbuster are just wrong moves in a highly anticipated sequel. That’s why even though it set a 3 day weekend box office record, it was swiftly knocked out by Tim Burton’s Batman and quickly forgotten. Unless they’ve learned their lesson from this, I fear for the newly planned third entry. Remember, Vigo is partly defeated by New Yorkers singing in harmony outside, which is perhaps only out-lamed by the ending of Krull, where the villain is defeated by bolts of pure love.

Take a good look at Dan Aykroyd’s writing career since Ghostbusters. Besides this sequel, he committed the following crimes that led to the atrocity known as Blues Brothers 2000: Dragnet, Nothing But Trouble, and Coneheads. He’s selling wine now, and I think he needs money. Harold Ramis has had a few stinkers, but I feel safer with him. Bill Murray has become almost as subtle as Jack Benny did in his later years, and has redeemed himself many times over for this sequel. So the new one can be hit or miss, we’ll have to see. The ’90s smarm is over; if this one is better than Die Hard & Indy 4, it’ll be something.