I finally watched Pépé le Moko, the crime film set in the Casbah of Algiers with Jean Gabin as a Parisian crook holed up in its seedy labyrinth. As a lifelong fan of Pepe le Pew, I almost fell for director John Cromwell’s attempt to erase this film by buying up prints and destroying them. See, he directed the remake Algiers with Charles Boyer and Hedy (Hedley!) Lamarr, and didn’t want the French classic by Julien Duvivier around for comparison. Now I’ve seen both, and while Hedy is gorgeous, see this one. Jean Gabin brings great life to the notorious thief Pépé le Moko. 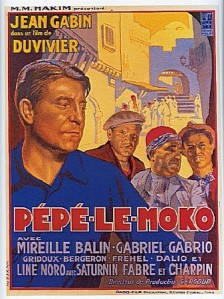 I’d seen Gabin before and admired his skill in Grand Illusion and the lesser-known early noir Port of Shadows, and he’s equally excellent here. Like the skunk that would later spoof him, he has an effortless way with women; he exudes such confidence, and moves through the exotic world of the Casbah as naturally as a jungle cat in its realm. According to wikipedia, Graham Green cited this story as an influence on The Third Man, and the story is similar, except we meet Harry right away. Pepe is king of his domain, his small pond that he cannot escape. The cops set up traps, but he’s eluded them for two years, playing cards and pulling small heists with his gang. It’s not until Gaby, a Parisian beauty trophy-wife of a fat businessman who visits Algiers for the thrill of it, shows up that Pepe remembers the City of Lights and yearns for his home.

In the meanwhile we get a gritty gangster tale as stool pigeons are lured by the cops, and their victim, returning to Pepe’s hideout with a bullet wound, is helped to shoot the snitch with his dying breath. That’s part of what made the movie so appealing, how it balanced a crime tale with romance equally well. Its influence would go on much further than cartoons, and the dangerous beauty of Algiers would inspire even greater films such as Casablanca and the aforementioned Third Man. The remaining prints are soft and scratchy at times, but the poetic realism style holds up especially well today, and never feels old fashioned. In fact, some parts seem a little brutal if you see them through classic-film glasses; there’s no Hayes Code here. 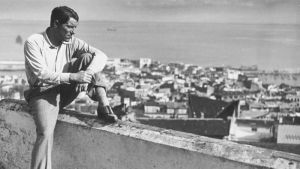 The tough guy whose heart betrays him is now an icon of cinema, and Jean Gabin’s Pépé le Moko is one of the first and the greatest. Like Humphrey Bogart after him, he was able to convey immutable strength and yet, weakness inside that would engender our empathy, not our contempt. He was more handsome than Bogey, which makes his tough guy persona harder to sell, but he does it effortlessly. He’s rough around the edges; used to getting what he wants. He slaps around the young crook he mentors, like he was surely cuffed by his own teacher; and Gaby is both aroused and frightened by his street manners. It’s not easy to be so confident and not come off as cocky, which would lose us from his side. Gabin knew how to pull it off, and this is probably his best demonstration.