Skip to content
HomeAvatar: Nature Trail to Hell… in 3-D

I’ve always liked James Cameron’s films. Even Titanic. But the commercials for his newest epic, Avatar, did not grab me. The aliens had a hint of the uncanny valley effect, due to their wide leonine noses, and the theme seemed indistinct. But after Roger Ebert- that 3-D and CG hater, gave it four stars, I decided to trust that James didn’t get nitrogen narcosis from those underwater movies he’s been making, and got tickets to a 3-D show at a real IMAX theater- not one of the many “a li’l bit bigger” IMAX screens in regular theaters that seem to be diluting the brand. I got ripped off at the AMC 25 Empire in NYC seeing The Dark Knight on a screen that didn’t wow me, and I didn’t want to get a bad impression with this film, that is supposedly set to change how we think about 3-D.

The movie starts with no credits and you’re immediately thrust into the 3-D jungle planet of Pandora, as Jake Sully (Sam Worthington) gives us a little history about the planet, who he is, and why he’s there. He’s a Marine who lost the use of his legs, but is being shipped out to replace his identical twin brother. The planet is so hostile that we explore it by mental link to genetically grown avatars of the local Na’vi people, 12 foot tall azure warriors who resemble Comanche meet the Maasai, and who don’t trust us, because we only want their planet for the resources. They have good instincts. Cameron gives us a bleak corporate future we’ll remember from Aliens; it’s 2134 and Jake is a paraplegic? Sure there’s a cure, he just can’t afford it on Veteran’s benefits. Sound familiar?

Earth’s presence on Pandora is corporate; led by Parker (Giovanni Ribisi), they seek an antigravity mineral called unobtainium, a reference to an old Duck Dodgers cartoon that tells us it’s a MacGuffin, it doesn’t matter; they just have something we want. Dr. Grace Augustine (Sigourney Weaver, looking as good as ever) is the science contingent, studying the Na’vi people and the planet’s complex ecology. And Colonel Quaritch (Stephen Lang, the bad-ass sheriff from Public Enemies) is the military arm, “defending” the construction workers as they drive huge earth movers through the Na’vi homeland. When Jake shows up, he’s meant to help repair the relationship with the Na’vi. But of course, Parker and Quaritch have deadlines to meet.

The story isn’t that complex and if you know Cameron and Screenwriting 101, it is a little bit predictable; but the richness of the world and the director’s experience in endearing characters to us through simply observing them make it remain an exciting adventure. The world of Pandora is dangerous and bizarre, and the Na’vi aren’t just “close to nature,” they’re still a part of it. They aren’t a simple allegory for American Indians, they are their own indigenous people. Their biology lets them bond with their horse-like mounts and flying dragon-like beasts without relying on hackneyed telepathy. It’s clever and thrilling, something we haven’t seen before.

Jake meets a Na’vi woman named Neytiri (Zoe Saldana, Star Trek) on a mission and after proving himself against Pandora’s host of hostile wildlife, he is introduced to the tribal elders- played by Wes Studi and CCH Pounder without stereotype. He gets an exclusive access to their culture and trains to be one of them, or at least his Na’vi avatar does. And he begins to see as they do. Through purely human means. It’s been a science fiction convention that “mind melds” and what not are what changes us, but the morality is so black and white that Jake sees it on his own. I liked that. 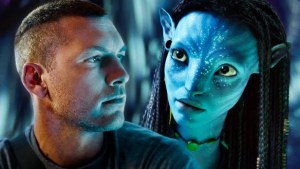 Of course, there will be a final battle between the people of the jungle and the military, with their mecha power-suits and twin-rotor gunships. We expect nothing less. And we do not get a silly battle as in The Phantom Menace; it is brutal, and no brilliant guerrilla tactics are going to give the Na’vi a sort of Ewok invulnerability. But seeing the blue warriors ride their bat-winged saurian mounts against gunships, and fire arrows the size of spears was exhilarating. Soldiers in powersuits with bayonets the size of chainsaws in melee with huge, agile aliens had a grin plastered on my face. And since it’s Cameron, you always know what is going on in the battle and aren’t given shaky-cam headaches. 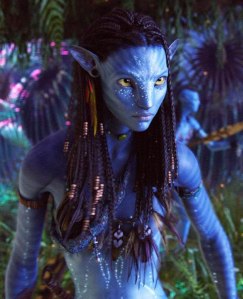 But there is more to this than an action film. I loved the richness of Pandora, the bizarre ecology down to the phosphorescent fungi and tiny floating jellyfish. It’s well planned and not a mish-mash of cool creatures. Some seem reptilian, others mammalian, and they have gills of a sort to filter the atmosphere that kills humans in minutes. There’s so much to see that Cameron had to use depth of field and objective focus to show us what to look at; apparently some are getting headaches from tryig to focus on what’s not in the field. Since he’s not throwing rocks and spears at us non-stop to show off the 3-D, try to relax and focus on what’s obvious. Then everything settles and you see the depth in the screen. One excellent example comes early, when Jake awakes from cryo-sleep in the zero gravity of a spaceship. We’ve seen zero gravity before, but it looks so real in 3-D. The detail of the CG is so crisp that not once did I balk. Beowulf it ain’t. The textures are amazing. This one lives up to the hype.

Five 3-D blue boobies out of 5
(and yes, it was really funny seeing Michelle Rodriguez run in a t-shirt in 3-D. Thanks, Mr. Cameron!)

One thought on “Avatar: Nature Trail to Hell… in 3-D”