Skip to content
HomeHey, we’re not birds! We’re a Jug Band!
The grass does not grow on the places where we stop and stand! 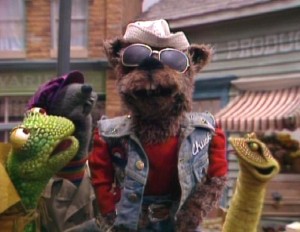 Ah, Emmet Otter’s Jug Band Christmas Special. It was one of my favorite Jim Henson creations. The music is great, the characters come to life, in the end Heavy Metal TRIUMPHS. It doesn’t have a smarmy happy ending; there’s no miracle, and the otter family still has to struggle. But they’ve come together and found their talents, and perhaps there is a glimmer of hope for the years to come, if Doc Bullfrog is true to his word.

It’s a simple tale based on O. Henry’s “The Gift of the Magi,” as Ma Otter and her son Emmet both vie for the prize in a talent contest so they can buy one another the gifts they want for Christmas- a piano, and a guitar with mother of pearl inlays. It’s based on a children’s book by Russell Hoban, who may be more famous for writing a cult classic post-apocalyptic novel called Riddley Walker. I had no idea. Strange coincidence, is it not? The songs were written by none other than ’70s icon Paul Williams, he of The Phantom of the Paradise who appeared on many Muppet show episodes too.

It all comes together as a tale of bittersweet poverty that reinforces the adage that your health and your loved ones are the real gifts to be thankful for, and that talent and hard work never go unrewarded. Even if the biker gang rock band leaves you in their dust. I haven’t watched this one in a few years, but recently found that my sister has a copy, and we’ll be watching it this Christmas Eve, I’m sure.

Since the internet is bare of the music, here’s a band covering the Nightmare song at Lee’s Liquor Lounge in Minneapolis: