To your dismay, my resolution this year- along with the usual eat less, save more, and try not to explode with anger at the discourteous terminally oblivious jackass that has become my fellow New Jerseyan- is to spend less time online. My overflowing bookshelves and ten year backlog of unread tomes has become a running joke; I have more unwatched DVDs than many people have DVDs, period. I have a wall of them. So, what does it all mean, Basil? I took a hiatus of sorts while I was on a lazy holiday-peppered vacation these last two weeks, posting few and far between, and that’s going to be the norm. If you peruse the archives going back to 2008- and I hope you do- I was posting every day for a long time. It became an obsession; I’d watch bad movies just to blog about them, I’d patter about just about anything. So think of this as quality control. I’ve still got plenty to share, but it will hopefully be more interesting. 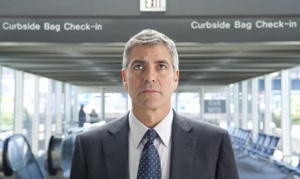 So, that being said, I saw Up in the Air with Firecracker last weekend. It’s one of the year’s best films, and shows that Jason Reitman is maturing at an exponential rate. At first glance I wanted nothing to do with it; a story about a road warrior whose job is to fire people? We can’t all choose our jobs; I wouldn’t squint at a guy who shovels horseshit and wonder if he’s a coprophiliac. But a professional, like a proctologist, sometimes I wonder if they saw it was an understaffed field, or if they just like assholes in an unwholesome fashion. I mean, if Quentin Tarantino got a medical degree, we know he’d be a podiatrist. But I digress; George Clooney plays Ryan Bingham, a man who loves being unanchored to the Earth, spending 274 days a year flying at his job as a corporate contract killer- someone hired to fire people en masse.

I encountered one of these firms a few months after 9/11, when I was working for a company- or should I say, no longer working for a company- HQ’d in Israel, whose stock nosedived. It was pretty funny, at the time; I’d only been there since February, I was a Cheeto-encrusted gamer nerd with a 6 hour a day Everquest addiction, and after seeing people file in and not file out, when I was called to the Roach Motel office, I knew the axe had come down. I was practically giddy- 2 months severance? Sign me up. They were expecting fear and rage, and I took my packet and wanted out of there ASAP. I still have the bagel slicer some co-workers gave me. It was a month before Christmas, I spent the winter raiding dragons and searching Monster. I had a positive outlook. That was when the book the movie is based on was written, after the dot com boom but just before the 9/11 bust. Now, I’d be heading toward that office with dread and uncertainty.

Releasing a movie about a corporate ax-man during these times is a tricky thing; can you generate sympathy, or even empathy for a Judas goat? Jason Reitman manages it, with his screenplay based on Walter Kirn’s novel. He returns to his trusty voice-over model, as Firecracker reminded me, well-used in both Juno and Thank You for Smoking. Ryan Bingham embraces his empty life choice, and even speaks about it as his “empty backpack” philosophy. No baggage. None except a carry-on, of course. Perhaps done a little more poetically in Fight Club with “single-serving friends,” but an equally chilling portrait. But as headhunters learn, their own head is someone else’s prey; Ryan’s boss (Jason Bateman, who’s everywhere nowadays) has brought in psychologist and efficiency expert Natalie Keener, who’s going to save them tons of money on travel by switching them to firing people by videoconferencing. 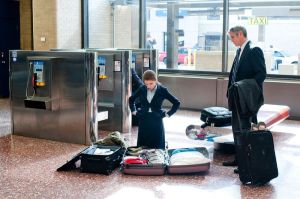 This puts a damper on Ryan’s lifetime goal of reaching ten million frequent flier miles, and the benefits that come with ultra-elite status. In a country without royalty that claims to be classless, we love being treated better than common scum, even if it only means a free bottled water in our hotel room, or being able to take the shorter line. To keep the road movie format, Natalie flies with Ryan to test her system. On the road, Ryan has met a kindred spirit in Alex (Vera Farmiga) who also fetishizes the fetters of travel like Concierge Keys and sexts with him on her Blackberry when their itineraries don’t intersect. The film is busy, like Ryan’s schedule; he has his sister’s wedding to go to, as well.

The film has plenty of clever moments and some good laughs, but where it shines is when it spotlights our vulnerability when we’re rudely kicked out of our cozy cubbyholes by the cold quantization of others who reduce us into abstracts and headcounts. We see Ryan and Natalie at work delivering the news to the newly fired, and a few are cameos, but most are normal folks who lost their jobs recently, who were asked to say how they felt. Hopefully they got a decent paycheck, too. But it’s something only great actors can fake. Ryan gets the rug yanked out from under him late in the film, and I have to say that Clooney manages it. We’ve seen him get his fingernails pulled out before, but the shaken realization he has here is a career benchmark. He consoles the dearly redundant with a stone-faced there-there; pep-talks his brother-in-law-to-be with an honesty that cuts to the bone. Up in the Air is one of the best films I’ve seen this year, and Clooney’s performance is even better than the recent Michael Clayton. We’ll be seeing him again at the Oscars this year.

5 out of 5 mile-high club entries