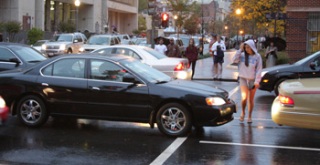 The zombie apocalypse was long foretold as a rather exciting bit of bother involving shotguns and chainsaws, but the reality of it is rather depressingly boring.
The Zees shuffle about their daily lives much as they did before, twiddling their thumbs, ignoring everything in their path. They bump into you with nary an ‘excuse me’ or a ‘sorry,’ mumbling to themselves sometimes, laughing like idiots, shoegazing shamblers in mental oblivion. There’s a bit of excitement when they shuffle into traffic, ragdoll physics in action. The fresh ones spray blood, the matured snap crackle and pop like breakfast cereal.

It was disconcerting at first. Undead, as opposed to unliving. Somewhere inbetween. I can see the attraction, because life isn’t much but a repetitive daily lever pull to get your fish biscuit, and hope the Scientist doesn’t shock you today.

Speaking of scientists, they carved a few up, of course. They talked of supersoldiers, or the end of physical labor. But Zees can’t follow even the simplest task. Pure lizard brain. Like a loop of adverts gone haywire in their heads. You can’t even get the buggers to look up. They did manage to scan groceries, but the issue of hygiene came up.

The normals, as we call ourselves- don’t we always think we’re the normal ones? We thought about the shotguns and chainsaws, in the beginning. But they left us alone, so we lived and let live. No reason to go all Sir Paul McCartney, and let die. There’s so many of them, it would take months. Imagine the pure monotony of it.

Really, what would be the point? The only thing it would accomplish is making the world smell somehow fouler. None of the zombie movies ever mentioned the revolting fact, that the first task on the to-do list of the newly unliving is the Voiding of the Bowel. Moaning “brains” isn’t even on the page. Commence Rotting, that’s somewhere down the line, but Ye Olde Pants-Shittery is A number One, right ahead of Walk Even More Bloody Slowly During Morning Rush.

If I were clever I’d make it Number Two, but who’d laugh?

At night it’s worse. You can’t go to a pub anymore, with a brain-dead fellow who’s shit himself bellying up next to you, ordering a pint that never comes. The barman’s not going to pour it, and the Zee wouldn’t notice anyway. They operate purely on muscle memory. Glassy eyes staring down, alight with sickly glow. Smelling sickly sweet.

Have you ever smelled sickly sweet? Pardon me for using that old trope. There’s nothing sweet about it, unless there’s a chocolate bar melting in the corpse’s pocket, is there? Whoever came up with that one? I’d hate to see what they put in their tea, if that smelled sweet to them.

Sometimes I watch from my window as they shuffle along. Monks holding candles. Thumbing away and texting my remaining friends who fingers haven’t rotted off. Watch a video of them stumbling off train platforms into the abyss. The first one got saved. A hero, they called him. Now the heroes are the ones who give them a little nudge. Nudge nudge wink. Say no more. Ha Ha Ha.

They say you don’t even notice, when it gets you. It just sort of happens. Your eyes stay down, one hand out, a blithering smile. It got the younger first, then the businessmen, now even codgers slip into the dead drool shuffle. You hear the exasperated loved ones droning on and on about it at the office. Really, we’ve all lost someone. No use whining out loud about it. Sob sob sob. Put a memorial on their Facebook page, and be done. Maybe they’ll “like” it. Click clack click.

For example Alice, she’s practically hysterical. Bitch bitch bitch. I’m just trying to get to the water cooler for my break, and have a bit of fun thumbing away at my phone game. It’s not my fault she didn’t look where she’s bloody going, is it? I don’t know why I’m headed there. I’m not even thirsty. But it’s break time. I’d heat my lunch if I were hungry. No fish biscuit. Dum dum dee.

The taxi hits me knees first. Faceplant on the bonnet, phone shatters on curb. Arse over tic. Here comes the bus.