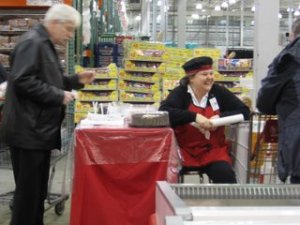 Some days you just need a day off. Not really a vacation, just a break, you know? I did that the other day, just tried to relax, but I started to feel stir crazy. I washed the car, and remembered how dirty my neighbor’s car usually was, and figured I’d surprise him and hit with the hose. But it wasn’t there, he must have had the same idea.

So I went around the house and realized we hadn’t upgraded to those new energy saver light bulbs, and I went to Costco. I haven’t been there in ages. It’s kind of skeevy, but we paid for the membership, and it was getting ready to run out. So I figured I might as well use it.

The parking lot was packed. Another reason I skip going there. I had to park all the way in back, between two beaters, and on the long walk to the entrance, I saw the Gunderssons’ Subaru. It looked like he’d already gone shopping, so I figured I missed him.

They don’t let you in unless you have your card, and I had mine somewhere, and was digging around for it when Will Gundersson walked out of the restroom, saw me and jogged over.
“He’s with me,” he said.
Same old Will. Scruffy blond beard and glasses, he had a Devils cap on and a hoodie, like a kid.
The greeter gave me a look, if you can imagine that, but let us pass.

We pushed our carts slowly down the wide aisles. A lady was hawking cheese on crackers in an uneducated monotone. Will adjusted his cap, then stepped up to take one of the paper muffin cups, all neatly lined up, each containing a little cracker crowned with goo.
“Brie. Want some?”
“No thanks,” I said, and patted my not-as-flat-as-I’d-like stomach.
“You’re looking good, Will. Been hitting the gym?”
“No, just watching what I eat.”
He smelled like he came from the gym.

We made our way toward the back. His cart had a jacket stuffed next to one of those giant boxes of cereal, that just seem kind of off. Like those knockoff Lego pieces.

“Hey Brett, how’s business?”
“Getting by. How about you?”
I saw the light bulbs I needed, and ditched my cart to duck down the aisle and grab them. This place is so disorganized. Cheap enough, but you felt like you were in a bread line here. Part of the reason I stopped shopping here was it irked me to pay for membership, like it was some sort of country club for people without money.

When I got back, Will had joined a group of people surrounding a black lady serving food from a little metal grill, like at the school cafeteria. She had plastic gloves on, and I never saw the point of those. I mean yeah, I don’t want your hand touching my food, but if you touch everything else with your gloved hand, it defeats the purpose.

There were already people behind Will, like pigeons peering to see what she was giving away. I got in line next to him.
“What’s she giving away, cars? Like Oprah?”
“Cheese steak,” he said. “The best sample. They don’t give these out all the time.”
“You know, your yard’s looking a little ragged.”
He didn’t answer.
The lady handed him a muffin cup with his little cheese steak. It reminded me of the cheap cafeteria food at school. She offered me one and I was about to say no, when Will cut in.
“Yeah, he wants one,” he said around a mouthful.
She pushed it into my hand, and we moved along. Before the line turned cannibal.

“You sure you don’t want that?”
I shook my head, and he took it.
“We’re not in the house anymore,” he said.

We navigated around the back, where the refrigerator cases are. We stopped at each sample station, each took one, and I let him have mine.
“How are the kids, Will?”
“They’re great, just great. They’re with Melinda.”
“Tell them Nate says hi.”
“Oh, sure.”

We’d come full circle, to the registers.
“Well, uh, I have to go back and get a few things,” he said.
“And Will, I’ll uh, let you know if anything opens up.”
“Thanks, Brett. I’d really appreciate that.”
“You look good, man, really good.”

I got in line, and watched him push the cart over to the restroom area, and change coats. He took off his hat, and put his glasses in his pocket. Then he put a coffee maker in his cart, one of the pod kinds, and slowly pushed it back toward the cheese lady.

6 thoughts on “The Costco Diet”