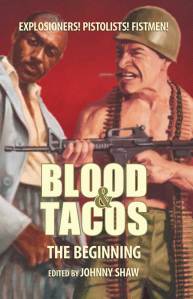 Blood & Tacos: The Beginning is now available! The print-only omnibus that collects the hard-fisted, pistol-packing fiction stories from the first four issues of Blood & Tacos, including BROWN SUGAR BROOKDALE #17: TITTY TITTY BANG BANG by Jerrold Olden Earnest, which I discovered in a hidden dojo beneath the Baxter Terrace projects in Newark.

Brown Sugar is a Vietnam Vet who learned the mystic arts of Kung Fu at the Shaolin Temple after fragging his lieutenant before he could napalm an innocent village. Now he’s back in the States, ready to break his foot off in the ass of the Man!

A loving homage to Enter the Dragon, Kill and Kill Again, Black Samurai, Cleopatra Jones, and the films of Fred Williamson, “Brown Sugar Brookdale” is just one of many stories from the thrilling to the hilarious, in this collection. For the record, I can’t even say L.A.N.D.B.O.A.T.: The Boat That Goes On Land without laughing, and Chingón: The World’s Deadliest Mexican always brings down the house when Johnny reads it at signings. If you like Machete, you must meet The Explosionist, Father Dukes, the Irish street priest, and Sunshine: Stripper Assassin by Josh Stallings.

Johnny Shaw has limited signed copies available. Writing for Blood & Tacos is always a blast, and this collection is about to go supernova in the spiral arm of your brain galaxy. Get some.