Skip to content
HomeAn ode to the vanishing char-broiler 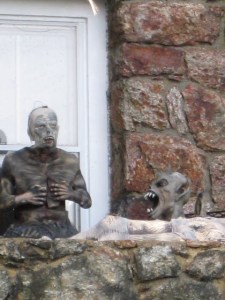 My love of burgers started in the womb. My mother used to send my father for grilled hot dogs, burgers, and fried clams at the Three Acre Grill in Lyndhurst, a grease pit lost to urban development. /The photo is from the ’40s, when dining and dancing were offered; by the late ’60s it was less fancy. Beef patties broiled crisp, frankfurters seared with grill marks, that blend of tantalizing char and rich fat melted under flame. Science has proven it is more addictive than cocaine, but at least it won’t make you look like these guys. 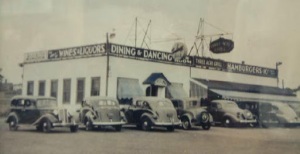 Growing up, we’d stop for a summer treat at one of Route 3’s many char-broil grills. The long-gone Red Chimney was my favorite, with its ridiculous ’50s-era smokestack and counter-top dining. When it was gone, the historically named Anthony Wayne, after Revolutionary War Brigadier General “Mad” Anthony Wayne, took its place. They seared their thin patties on what fry cooks would call a “salamander,” a brutally hot grill that finished burgers in minutes, then they slapped them on gummy white hamburger buns. You could get American or cheddar, but the hot burger relish was what made them memorable to me. They served orange whips and the usual deep-fryer fare, but the burgers with their crisp, carcinogenic broiled crust were the star.

The Anthony was in a horrible location in the armpit of where three major highways merged, and required dodging multiple lanes of traffic full of mall-seeking moms and teenagers headed for their driving tests at the Wayne DMV. You truly risked death to get one of their burgers, and it made them taste even better. You’d want one for the road, wrapped in wax paper. The little cozy restaurant was decorated log cabin style with pictures of the Mad General and his exploits. I bet in the old days they had fake flintlocks and Daniel Boone accessories festooning the rafters with the odd ratty stuffed raccoon. It too, has been relegated to Jersey grease stain history.

So when I was driving to High Point State Park for a hike with Firecracker and saw the garish brown and orange cabin decor of The Elias Cole, I knew I had to stop there for a bite. I’d seen the place years ago when I hiked there with Milky, but we were broke and they take CASH ONLY. Wow, they really take this retro thing seriously, don’t they? Inside, we grabbed a booth and were served by friendly waitresses wearing bunny ears, for the Easter holiday. It was like stepping back in time to my char-broil days of youth- I prefer that term to “salad days.” The menu was simple: burgers, franks, shrimp in a basket; the char-broil staples. This being Saturday, they had dinner specials of hot roast beef, chicken or pork with mashed potatoes and gravy, and several older couples were there to partake of the plates piled high with meat-stuffs. We of course, went for the cheeseburgers.

They come on a freshly baked French sandwich roll, and they make the burger shaped to fit it. It’s capsule shaped, and seared with a fine grill crust that brings memories of summer when you bite into it. Just juicy enough and full of classic beef flavor, topped with two slices of American cheese melted to the roll and optional lettuce, tomato, and pickle, this is a classic roadstand burger with great taste. The roll really helps, crisp on the outside and still soft enough to absorb juices and squish down to make the burger easily edible. They also make great fries, standard and sweet potato. In fact, the sweets are some of the best I’ve had, better than the Cloverleaf Tavern, my previous fave. 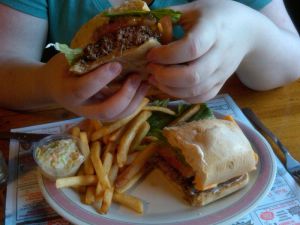 You owe it to yourself to visit the highest point in the state of New Jersey- 1800 feet above sea level, and home to the Veteran’s obelisk monument- and then drive on down to the Elias Cole on Route 23 for a burger. Who’s Elias Cole? I don’t know. It’s not the name of the current owners. But it’s a fitting name for a classic char-broiler joint like this. It rings of the ’50s era frontier revival that these roadside restaurants thrived in. Some googling suggests he lead an Ohio regiment of volunteers in the Civil War. Next time I’ll ask.

Some other char-broils I recall are St.Paul’s excellent St. Clare Broiler, where I used to get liver and onions with Deneen “The Neener” Gannon in my Twin Cities days; she loved a good diner and the St. Clare reminded me of Jersey. One I have yet to try is the Montclair Char-Coal Broil on Valley Road, which is newer but has the right style. They’re a dying breed, killed off by fast food chains that barely serve things that can be called meat anymore. Do your mouth a favor and visit one of these anachronisms while they remain, and remember what a burger was supposed to taste like. 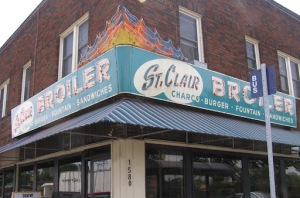 But most importantly, if you visit High Point State Park, be on the watch for zombies and vampires, which infest the place:

2 thoughts on “An ode to the vanishing char-broiler”

You Talking To Me? Leave a Reply: Cancel reply