I dunno if you heard, but they found Bigfoot. (He was cruising in Elvis’s UFO). Apparently some dudes down in Georgia found a body of a large hairy beast in the swamps known to harbor Skunk Ape, the stinky sasquatch of the South. Unfortunately when they thawed out the freezer with the body, it turned out to be a rubber suit. Big surprise there. Despite finding possum and human DNA in the samples they gave for testing. It looks like someone decided to stuff roadkill in a suit and pull a hoax, but they made a big splash, and who doesn’t love a good hoax? I sure do.

Growing up in the ’70s, there was a huge Sasquatch vibe. Bigfoot captured the perfect combination of budding environmentalism and mystery needed to soothe the malaise borne of enormous collars and paisley prints, and the creeping realization that our country was becoming a garbage-covered shithole. The idea of an angry ape in the woods, pissed off at us throwing Chunky bar wrappers and empty cans of Tab on his turf, was a tempting one. Maybe he would beat up Richard Nixon, stomp a Japanese car, and throttle an oil sheik, and we’d be number one again. 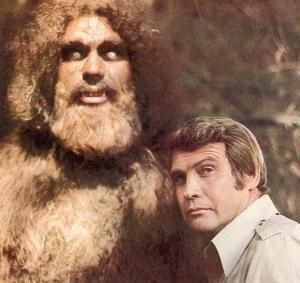 There were a lot of Pissed Off Nature movies in the ’70s- grizzlies, piranhas, sharks, ants, spiders, whales, frogs, worms, snakes, alligators, and even killer bunny rabbits were all out to get us. Why not sasquatch? In 1973 a quasi-documentary called The Legend of Boggy Creek was made as a low-budget labor of love by Charles Pierce and Earle Smith, who also gave us the eerie docudrama The Town That Dreaded Sundown, about a Zodiac-esque killer who haunted Texarkana in the ’40s. This came first, and was perfect drive-in fare; it became a huge hit, making $20 million when movies cost 50 cents. The Godfather only made $134 million! It even inspired The Blair Witch Project with its shaky camera style.

The story told by the narrator is of when he was a child in the ’40s, of the Fouke Monster– an apelike creature sighted in “the Bottoms” swampland where Arkansas, Louisiana and Texas meet. It’s a haunting area, memorably depicted in Joe R. Lansdale’s novel The Bottoms, which isn’t about Skunk Ape but you can imagine the beast of Boggy Creek lurking in this area. The movie is more of a nostalgic documentary on rural swamp town life with occasional appearances by a huge hairy beast in the woods that’s probably a bear. While it never approaches the documentarian mastery of Louisiana Story or the like, it has a down home charm to it, because many of the people who claim to have seen the creature play themselves re-enacting the sighting, or daily life.

A simpler time, when Indians didn’t cry by the river.

Folk songs written for the film, such as “The Ballad of Travis Crabtree,” about a young swamp hunter who’ll remind you of Huckleberry Finn, give it a “Grizzly Adams” vibe. My favorite is “Where the Creature Goes,” where we hear the singer pine for the creature’s “lonely cries ringing out over his watery domain.”

How I miss his lonesome cry.

The Boss-Man and I watched it one night, and it is definitely a window back to the early ’70s. Nowadays the closest you’ll get to this is stuff like “Ghost Hunters” on television, where someone recounts a spooky tale while the camera creeps around with night-vision on, and some low-budget effect recreates what they claim they saw right before they pooped their pants. The beast may be a guy in a suit, but they keep him shrouded in the dark woods where only his silhouette can be seen, and the first-time actors do a fine job of being themselves and then shitting bricks. One fellow says he took aim but wasn’t sure if it was an animal or a man, and didn’t want it on his conscience.

I don’t have any beef jerky, dude!

So why are there still bigfoot hunters out there, even though the hoaxer who created the famous “walking ape” footage admitted it on his deathbed? It’s something we’d like to believe in. I know I wish we had wild man-apes cavorting in the woods. Or something undiscovered. Cryptozoologists like to remind us that the okapi was “undiscovered” until 1902, despite natives insisting that it was out there, but that was in Africa, a much wilder place.

The sequels to The Legend of Boggy Creek were Mystery Science Theatre 3000 material, but the original has a sort of hokey, low-budget charm to it. Can you imagine an era when something like this would gross 25% as much as something like The Godfather? Well, I guess it still works; The Blair Witch Project made a bundle, was shot on a shoestring and based on vague folktales. I only saw it years later because the Discovery channel ad campaign rubbed me the wrong way. But nowadays when you hike in the woods, you’ll joke more about the witch than the sasquatch. Or maybe manbearpig.