I’ve written before about how crime is down but reporting is at an all time high. The news media, primarily television, has taken “if it bleeds it leads” to a whole new level in the United States. There was a comparison about how Canadian news handled the Ottawa Parliament shooting vs. the sensationalistic so-called reporting we got here in the States. This picture sums it up: 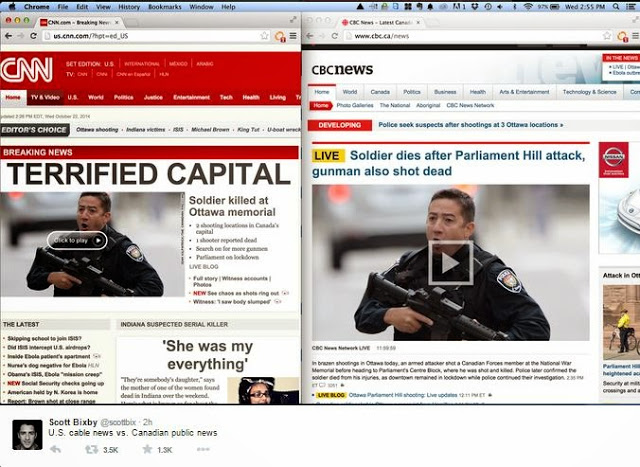 This constant baseline of fear is not good for us. The stress will certainly affect our health, but it clearly affects our judgment . Take for example this terrifying 40 truck convoy on the Virginia highway, and how it was immediately spun into a conspiracy involving FEMA camps, forced flu vaccines (the horror!) Ebola and martial law – (from Snopes):

I can tell you one thing. These trucks are transporting more than you think ? It’s all starting. Some will know what I’m talking about and other’s will just keep believing what FOX news tells them and vote for the candidate who lies the best ! We are SOOO screwed !

Well, we who are paying attention, know something big is going to happen for sure and really soon ! So many things and all of them are so close together…….. I see a dictatorship being announced, military hitting the streets, jets overhead, forced Ebola/flu immunizations (rather true or not) Martial Law, food/water shortages, etc……. We’ll see ?

What was this obvious chicanery, this plot against our liberty, this sure sign of the coming Obamapocalypse?

A charity event for the Special Olympics.

The truck convoy is a unique one-day celebration where police escort a convoy of trucks through cities and towns in 38 states and Canada. The event helps raise funds and awareness for Special Olympics athletes. About 110 vehicles participated in the ride.

In 2013, over $20,000 was raised with 49 trucks participating in Virginia’s nearly 50-mile round-trip convoy along Interstate 95 from Caroline County to Henrico County, according to a press release sent by Virginia State police.

Now that’s pretty damn cool. Makes me wish I was a truck driver. I’ve volunteered with special young adults since high school, and I respect those who give their time to help them and their families. But it goes to show you that if you’re afraid all the time, everything you see is a potential threat. I am a firm believer in Situational Awareness, but that doesn’t mean being paranoid. It means being aware. Our response to threats is beyond all proportion. Look for example how we are responding to the Ebola crisis in Africa. By trying to close our borders and penalize anyone who is actually doing anything to stop it at its source.

Part of this is because our science education is lacking. Ebola is not a threat to a country with a strong healthcare infrastructure, who follow scientific protocols and do not fall victim to superstition. Well no wonder America is scared, we’ve strayed from those principles for a long time. We like calling our health care system the best, but th only Ebola patient who died in America was sent home with an antibiotic because he didn’t have health insurance. Yeah, really.

So maybe we should be scared, just a little. I wouldn’t want to go to a hospital where there was an Ebola patient, because 48,000 Americans die each year from infections contracted while in the hospital. Whether it’s pneumonia or Legionnaire’s Disease, we have a bad track record. Probably because for-profit hospitals don’t have to follow strict protocols or suffer consequences for not fixing endemic problems. I’m not a fan of having to pay $5,000 a year my health care and then pay co-pays and deductibles. Those “crazy” tax rates in countries with universal health care and college education start looking mighty sweet. But then we’d never get over having to pay for a fellow citizen’s health without judging them. Because we’ve never learned to judge not, lest we be judged. Our own mistakes are unavoidable, forgivable; the mishaps of others are moral failures that must be punished, with redemption denied for eternity.

“This myth-shattering graphic novel challenges readers to re-examine how the media “governs” their lives, whether in print, over the airwaves, or online. A chilling account of willingly-embraced oppression and abandonment of individual autonomy in exchange for the predictability and comfort of fascism, Underground is a new genre: the Graphic Novel presented as Visual Cinema. Adapted from the original screenplay of Andrew Vachss by Mike Richardson (47 Ronin, Crimson Empire, The Secret) and noted author Chet Williamson, with art by Dominic Reardon best known for his work on 2000 A.D.”

It is available in comic book shops now, but by purchasing or pre-ordering the book through the AMAZON SMILE program, a percentage of the sale will be donated to PROTECT, at no cost to you. You can sign up for Amazon Smile, and learn more about the program here:
http://protect.org/amazon-smile-program 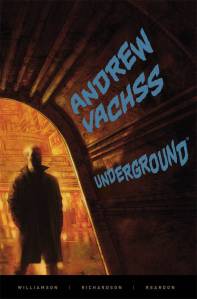 The writers who contributed to Protectors: Stories to Benefit PROTECT gave their all. Here are some of the awards and nominations they’ve racked up:

First, “Adeline” by Wayne Dundee won the Peacemaker award from the Western Fictioneers for best Western story of 2013.

Then “Baby Boy” by Todd Robinson was a finalist for a Derringer Award for best short crime story.

And now, Dave White’s “Runaway” is listed in The Best American Mystery Stories 2013 under Other Distinguished Stories of 2012:

And that’s not counting the awards the previously published stories have received, like “Season Pass” by Chet Williamson an Edgar finalist for 1989.

Fans of Ken Bruen, James Reasoner, Ray Banks, Patti Abbott, Nigel Bird, Johnny Shaw, Dan O’Shea and many more will find new stories that you won’t find anywhere else. 100% of proceeds from Protectors go to PROTECT, the only lobby that fights the abuse of children exclusively.

It is available in all e-book formats and in paperback:
Protectors: Stories to Benefit PROTECT

The anthology I’ve been working on since January, to benefit PROTECT and the National Association to Protect Children, is now available. 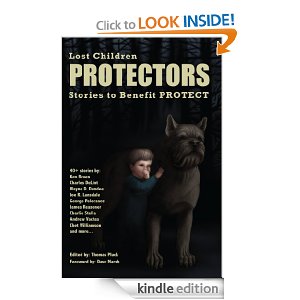 The book is now available for Kindle, and the pages at Barnes & Noble and Kobo will be live soon.

For updated order information, including how to order it directly through Paypal (generating the largest donation; you can upload the Kindle or ePub file to your reader, or read it on your PC) go to the PROTECTORS Official Web Page.

The book will also be available for the Apple iPad and on Smashwords. Our designer is working on the print edition, which will be available at Amazon and in bookstores.

The wait is over… go be a Protector!

For a year, I’ve been working on a follow-up anthology to Lost Children, the charity anthology inspired by Fiona Johnson‘s flash fiction challenge, hosted at Ron Earl Phillips‘ Flash Fiction Friday. It is nearly complete, and will be available September 1st. Here is the full list of contributors. 100% of proceeds will go to PROTECT and the National Association to Protect Children – the army fighting what Andrew Vachss calls “the only holy war worthy of the name,” the protection of children.

40 stories. One cause: PROTECT

In a few weeks, the e-book will be available across all formats. The print edition will follow.