Dom DeLuise is probably best known for being Burt Reynolds’ abused sidekick, but he did star in a few films of his own, and probably the most personal, and one of the funniest, was 1980’s Fatso. Movies like Big Night, Moonstruck and even Goodfellas– with Henry trying to work his illegal deals while also preparing meatballs and veal cutlets- have shown the Italian-American obsession with food, but I think none hit the mark as closely as this DeLuise film.

We see little Dom born, and he is a colicky baby who grandma placates with a cannoli when he cries. He grows into Dom DeLuise, and we meet him and his sister Antoinette (Anne Bancroft) at a funeral for an obese cousin. Everyone is crying and emotional, and fiery Antoinette is crying into the casket of Sal, telling him how much she’ll miss him, and she soon tirades into how angry she is at him for eating himself to death. Bancroft wrote and directed the film, and she perfectly captures that uniquely Italian-American manner of boisterous emotion, where the more we love you, the louder we berate you. Another matron just shakes her head and opines, “no more eggplant parmigiana, Sal.” 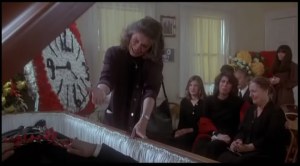 Dom sneaks to the kitchen to drown his sorrows with a heel of Italian bread dunked in bubbling tomato sauce and then coated with grated parmesan cheese. His New York food predicament is hilarious. He can’t walk five feet without a fruit salesman tossing him an apple, a vendor making him a dirty water dog as he approaches, the baker hoisting a sfogliatelle to lure him in. It’s very amusing today to see DeLuise, who’s skinnier than Kevin from “King of Queens,” be in a movie called Fatso. Compare it to Simon Pegg with a tiny beer belly in Run Fatboy Run. Nowadays DeLuise is barely fat.

Dom DeLuise is at the top of his game here, with a character capable of subtle sheepishness, exemplifying human weakness, and bursting into energetic comic slapstick. The funny fat guy- we all know one. Anthony DiNapoli is a hilarious paradox, showing how food is like air to some of us. He tells his younger brother, “You don’t know how to run your plate!” because he eats all his eggs first and then the bread. When he finally goes to the dietitian, he brings a bag of food for everybody from Balducci’s. The look of pure horror on his face as the nurse reads off the list of foods he’s not allowed to eat. When she says bread and macaroni, a tear runs down his cheek.

He meets a nice Polish girl named Lydia (Candice Azzara, Easy Money), and finds that when he’s around her, his romance with food slips to the wayside. He’s got someone to love other than eggplant parmigiana. When he goes to pick up a birthday cake and ends up waiting so long in line that he can’t stand it anymore, and eats a slice of the cake. This infuriates Antoinette so much she explodes in the way only Anne Bancroft can. This is the final straw that sends him to Chubby Checkers, a support group for dieters. Among them, Dom really looks like he barely has a weight problem, and Bancroft uses the camera to make us feel like gazelles caught in a herd of water buffalo. But the film is never really cruel; it just wallows in self-deprecation and celebrates human weakness.

“Give me those keys or I’ll cut you from your throat to your balls!”

They padlock the fridge and pantry cabinets shut with chains, and one night he’s watching food commercials and can’t sleep. “Gimme those keys or I’ll cut your throat down to your balls!” After chasing each other around with knives, his little brother Junior (Ron Carey, High Anxiety) convenes an emergency intervention of the Chubby Checkers. The parade of portly pals comes in to help, but Dom’s confessions make them so hungry they tear the chains off the wall and eat everything in the house. The slow descent into madness is brilliant. They start with hot water with lemon, which makes Dom say he doesn’t like cold food. Not even a cold apple? No, I like warm apple pie. With cold ice cream. You ever suck the jelly out of a jelly doughnut and then stuff it with chocolate swirl ice cream?

Watching Junior refuse to get the honey out of the cupboard as the houseful of hippos sits around talking about chocolate-covered orange wedges, he feels like a lamb in a wolf’s den. “The big guy couldn’t wait for Dom to make tomato sauce, so he ate my leftover lasagna- FROZEN!” After his big binge, he concentrates on time with Lydia, as she distracts him. And all his well until one night, after he decides to himself to ask to marry her, she doesn’t show up. Family is visiting, and they order Chinese food, which Dom goes to pick up. But he can’t get over why Lydia hasn’t shown up, and the Pu Pu Platter starts calling…

“You eat $40 worth of Chinese food and scare the shit out of everyone and you’re SORRY?” The final blow-up with his sister lets Dom have a funny, touching heart to heart with them about why he eats so much, and how he might not be so anxious about it if they loved him for who he is. “Do crazy people hate themselves? I’m always trying to find an excuse for eating! I don’t need an excuse. When I eat, I’m ME!” 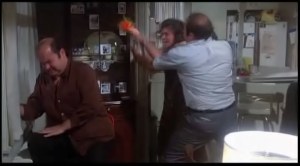 Now, this might not be trash, it’s actually a funny, touching and still poignant move madeon the cusp of the ’80s that feels more like an independent ’70s production. As someone who was morbidly obese and lost 160 pounds, the depiction of food cravings and how difficult it is to diet when you’re surrounded by a thousand sumptuous feasts beckoning you from every restaurant, bakery, and snack shop in the neighborhood were hilarious and true. (For the record I used to be Hurley, and I’m down to Jack Black size and still losing). If you want to remember Dom DeLuise at his best, this is the movie to find. Though his Caesar in History of the World Part One is unforgettable, natch.

Beers Required to Enjoy: 2 cannolis and an espresso
Could it be remade today? Sure, it should be.
Quotability Rating: Minor
Cheese Factor: Ricotta, melted mozzarella, and parmesan on top
High Points: Anne Bancroft’s insane sister
Low Point: The romance montage drags a bit
Gratuitous Boobies: Actually, there’s a tit in the opening credits… 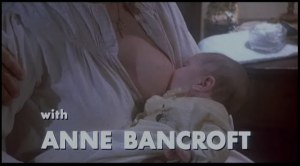