I saw this back in the early ’80s and loved it. It had everything a growing boy needed- Nazi killin’, explosions, corny humor and gratuitous nudity. In the wake of Tarantino’s similarly named WW2 epic being released this summer, I decided to revisit this gritty classic where Bo Svenson and Fred Williamson star as soldiers escaping court martial, who end up taking out an armored train carrying a new V2 rocket. 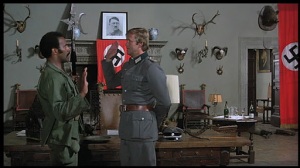 This is something we’ve rarely seen since Saving Private Ryan came on the scene- a World War 2 movie meant to be brash, unadulterated fun. Now they all need to be gritty and heroic, and while I love Band of Brothers as much as anybody, sometimes you need a movie about Bastards who accidentally kill a commando squad of American infiltrators, and redeem themselves by taking their place and completing their mission. It’s The Dirty Dozen, but we get to see their crimes.

What does inglorious mean anyway? Is it like in-famous in Three Amigos!? Does it mean really glorious? No, it means disgraceful. It’s a real exploitation title, because they’re really not that bad. There’s a thief and a forger who looks so much like a biker from central casting that it’s hard to remember this is supposed to be the ’40s, and a smooth talker named Tony who’s so obviously dubbed Italian-style that he seems even creepier when he rides the black guy with racist cracks. That’s Fred Canfield (Fred Williamson, Black Caesar) the tough-as-nails bad-ass of the group, and they’re led by rogue pilot Bob Yeager (Bo Svenson, Walking Tall Part 2), who’s in trouble for flying to see his girlfriend in between sorties. They even have a token German who’s tired of seeing Hitler destroy his country, who vows to lead them to the Swiss border.

Happiness is a warm gun

Fred Williamson and Bo Svenson make the picture- Fred is a born action star, and when he grabs his tommygun while saying “didya miss me baby?” we know all we need to know. He killed a racist officer in a fight and is sent to be hanged, but he loves killing Nazis so much that they’d be better off dropping him on Berlin like a black atomic bomb. Bo Svenson is pure cool in his aviator jacket and shades, lazing around when he’s not being a natural leader for a bunch of wild cards. We’ve got the star of what’s arguably the least exploitive blaxploitation film- Larry Cohen’s Black Caesar, which is essentially American Gangster– and the guy who replaced Joe Don Baker as Sheriff Buford Pusser.

Camelot! It’s only a model. Ssh!

The action is 70s-fake with bodies flying like ragdolls, bright red blood, and bursts of machine gun fire knocking Nazis down like bowling pins, but it’s still a blast, even when you can tell the castle is a matte painting. I was hoping they look at it and say “behold, Castle Wolfenstein!” and mutter “it’s only a model.” The mattes actually look pretty good, and when a German supply column gets totaled by bombers, seeing the destruction stretch into the distance is sobering, even after seeing Fred mow down Nazis by the score. But there’s humor, too. They wander into a stream where German W.A.C.’s are bathing, and manage a brief idyllic interlude until Fred wanders in. It still manages a coarseness similar to The Big Red One, one of my favorite war films.

They mow down Wehrmacht so casually that when they realize they killed a commando squad of Americans in German uniforms, they just pretend to be them. When they meet up with the French Resistance, the American officer waiting for the squad realizes he can either work with them, or scrap his mission- so makes them redeem themselves by participating in a risky scheme to steal an armored train carrying secret V2 rocket technology into Allied territory. The finale combines Von Ryan’s Express with the brutal body count of The Dirty Dozen and Where Eagles Dare, as they work to re-route the train, infiltrate it, and kill every Nazi S.O.B. that gets in their way. As a fan of the Castle Wolfenstein games, it felt as close to a B.J. Blazkowicz movie as we’ll get any time soon. 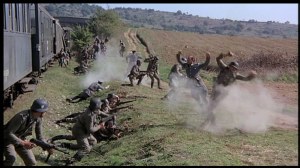 The Inglorious Bastards is great fun, well-paced but terribly unrealistic- not that you’ll care. If you plan on seeing Tarantino’s movie in August, you owe it to yourself to see this one first. Bo Svenson is rumored to have a cameo; not sure about Williamson, who was in From Dusk Till Dawn. Hopefully there’ll be a place for both of them. 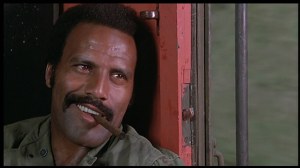 If you don’t like Fred Williamson you are a godless commie heathen.