The millennium. Y2k. SATAN. These all come to a head in Arnold’s supernatural cop thriller End of Days, where he plays a suicidal cop destined to save the world from the Antichrist. With a bad case of stubble and his tongue planted firmly in cheek, with Kevin Pollak as his partner and Gabriel Byrne as the Devil, Arnold faces his toughest opponent yet: Lucifer himself.

A prophecy is foretold; a child is born with a mark. The Pope is told that a woman must be killed, to save the world; he says that our salvation is also prophesied, and we must depend upon the man destined to do so. That man is Jericho Cane, NYPD cop with problems. When we meet Jericho (Arnie, that is) he has a gun to his head in his dark and dreary apartment. Before he can pull the trigger, his partner Bobby Chicago (smart-ass Kevin Pollak) shows up. This scene recalls Lethal Weapon, an infinitely better cop movie. This one has its moments, and there are many, but it is so confused and lacking a central vision that you wish it was a bit shorter.

We meet another nameless man, played by Gabriel Byrne, who is innocently washing up in a restaurant when a fiery presence explodes from the manhole covers down the block. It invisibly seeks him out, looking a bit better but reminiscent of the Predator in camo mode, and possesses him in the shitter. Doesn’t Satan know the rules? No eye contact in the men’s room. But ol’ Nick don’t follow the rules. He even kisses someone’s hot wife and grabs her tit at the dinner table. And the restaurant conveniently explodes as he exits.

I know it’s New York, but exploding restaurants full of rich people tend to make the news. But the big news is when Arnie gets shot at protecting an investment banker… who turns out to be our friend from the restaurant. The cops chase him down in an exciting sequence where Arnold hangs from a wire from a helicopter to get at the sniper running across the rooftops. The gunman obviously has no concern for his life, shooting at Arnold when he’s hanging onto him. They follow him into the subways and he spouts frightening imprecations before Arnold shoots him. Then it is discovered that he has no tongue. So is Arnie just having drunken hallucinations?

Christine is haunted by hallucinations, too. Homeless people taunt her in subway cars, telling her straightforwardly, “He is coming to fuck you, Christine.” And cackle as they explode into a thousand metal shards. The movie has a huge CG budget, but it doesn’t know how to use it. For example, Satan meets one of his worshippers, Udo Kier, and decides to warm up his demonic member on them. He melds their bodies into one, for a badly animated menage a trois. It’s so bad that even a nice set of tits couldn’t distract me.

Jericho and Bobby follow clues found on the tongueless priest assassin’s body, which leads them to his decrepit lair full of cryptic symbols and religious prophesy. His church is led by Father Kovak (Rod Steiger, how far you have fallen) who Arnold tries to question. He even follows him into the church’s secret spooky basement where a nun writhes on a bed with bloody stigmata. Steiger says the equivalent of “nothing to see here!” and shoos Arnold away. You’d think cops would care about bloody nuns and exploding restaurants, but hey this is New York.

I don’t even have a one-liner worth mentioning.

Before Lucifer finds Christine, a group of Vatican assassins try to kill her before he can slip her the Satanic pork sword. Arnie and Pollak just happen to be walking by, and shoot their way through her apartment before a priest can administer her last rites and slit her throat. And that’s all in the first hour. Gabriel Byrne’s Satan is the best part of the film- once he realizes his minions are incompetent and goes after Christine himself, things really start moving. When Arnie and Pollak are protecting Christine in her apartment, he has a novel way of dealing with their police van and the squad car guarding the building. The king of Hell’s urine is quite flammable, and he takes a leak in the street, tosses a cigarette and blows them to smithereens.

Arnie gets her to the church of the bleeding nun and has a little talk with old Lucifer. He offers him back his wife and daughter- and shows us how they were killed, by the mob, because Jericho testified against them. He’s one of those guys who’ll always do te right thing, even when the Devil is stepping on his bloody hand as he hangs out a highrise window. Byrne makes a fine Satan; he’s not as loud as Pacino, but just as dramatic and hedonistic. The movie is steeped in Hollywood Catholic Magic, where Satan is all-powerful and God sort of sits up there eating Cheetos and playing WoW, because we have to solve all our all problems with our own faith. Satan tells him, “Let me tell you something about God. He is the biggest underachiever of all time. He just has a good publicist, that’s all. Something good happens, “It’s His will.” Something bad happens, “He moves in mysterious ways.”

Satan can also walk right into a church and kill a bunch of priests, but Jericho manages to escape with her. Here he gets one of his best lines- as one of the Vatican assassins tries to sacrifice Christine, he shoots the blade off the knife. And then shoots the priest in the hand. “I can do this all day!” There’s the famous Arnie levity. We have so little in this dark and dreary film, which recalls the New York City of the ’80s. By 1999, Times Square was almost Disneyland, but End of Days makes Y2k truly feel like the Devil had returned.

By the last half hour, it feels more like an Arnie movie; Satan has Christine but must have some special fuck-pad planned for her, since he doesn’t just deflower her in the back of a cab. Jericho gets crucified on the Brownstone of Woe, but Priest Steiger saves his bacon, and he heads to the police station to load up with a grenade launcher and to use the NYPD magic people GPS to figure out where Christine is. It’s in a Satanic underground sewer pipeline filled with a billion candles, which actually looks pretty cool. If the Devil weren’t into foreplay, the world would have ended. But instead, Arnie gets to blow up natural gas lines with a grenade launcher and set a bunch of Satanists on fire. But hardly enough.

Byrne starts looking like Arnie did as the Terminator, as he gets more and more chunks shot off him- there’s a fun sequence on a moving subway train where they separate the cars and fire grenades the Devil, who acts like a zombie instead of the Prince of Evil. The final battle is in a cathedral, where Jericho has a religious epiphany as he loads his MP5 and grenade launcher under the the crucifix. He asks for strength, but it’s tough to take seriously in a movie where the Devil’s Urine has blown up cop cars, and Arnie eats a blender full of pizza and Pepto Bismol for breakfast. To make things utterly ridiculous, we get to see Satan’s true form as a mushy brown bat demon with tentacles, as he bursts through the floor. 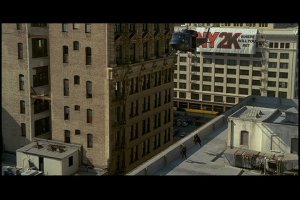 It makes you wonder why he didn’t just pop up and grab Christine, 2 hours ago, to save us the trouble. In case you never saw The Exorcist, the only way to kill a demon is to let it possess you, and then kill yourself. Jericho’s reward for the ultimate sacrifice is getting to see his wife and daughter as he dies. You’d think Jesus would stop playing Nintendo for a minute to give him a thumbs-up and a “good one, dude.”

The movie wants to be a mix of The Devil’s Advocate, Seven and a cop movie with Arnold and Kevin Pollak vs. a Satanic Cult- Cobra, perhaps? It doesn’t feel like an Arnie movie at all, and probably should have starred a smaller star. While it does have a few moments, sadly Arnold is not a part of many of them. It’s more Gabriel Byrne’s turn to shine as Satan, and Kevin Pollak’s cop sidekick is nearly as entertaining as he was in The Usual Suspects, which also uses the Baudelaire quote, “The greatest trick the devil ever pulled was convincing man he didn’t exist.” It doesn’t have the same power here, and my favorite line is Pollak defending his treason: “You’d be amazed what you’ll agree to when you’re on fire!” 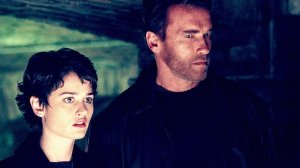 If I was da Devil, I’d fuck someone hotta. Just sayin’.

Part of The Arnold Schwarzenegger Project is to watch every movie he’s in, even if you know it’s bad. Like Batman and Robin, which I saw in a dollar theater and wanted $2 back, I know I hve to endure it again. End of Days is another one I dreaded; I saw it in theaters, and along with Eraser and The 6th Day, made me look forward to his career in politics. However, I really can’t do this movie justice. Having read Corey’s review over at Evil on Two Legs where he declares it The Worst Movie of All Time, I have to agree. For a huge star on a big high concept project, it seems like it was put together on bar napkins, and perhaps written in hooker’s lipstick on a coke mirror.

It jams so much together, can’t decide if it’s scary, funny, or both, and makes very little sense. Sort of like a hyperactive fat nerd trying to be cool at a convention, trying to distract you from his body odor. Directed by Peter Hyams, who’s never been known for great movies- he’s sort of a Walter Hill with no style- this is probably his biggest movie. I like some of his older films like Outland, Running Scared (the Gregory Hines/Billy Crystal one from ’86) , the serviceable 2010: The Year We Make Contact; but he also did Timecop, Sudden Death and A Sound of Thunder. Add End of Days to Hyam’s crap list.

All the entries in The Arnold Project