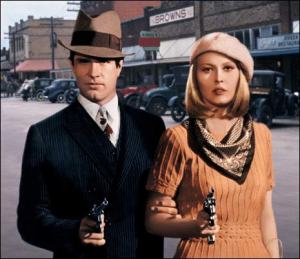 I didn’t appreciate this movie fully the first time around- I’d just seen some Warren Beatty atrocities like Dick Tracy and Bulworth, and could barely stand to look at him. Watching it again, I can appreciate his performance as Clyde Barrow. Having seen Breathless (À bout de souffle), I can see thematic influence, even if it has its own editing style. They meet by chance when she interrupts him stealing her mother’s car; he tells her he’s been to prison for armed robbery, but she doesn’t believe him. There’s a great (and funny) shot when he draws his revolver and holds it across his waist, and Penn frames it like a porn shot; Barrow obviously dresses to the left, and Bonnie Parker is turned on even before he robs the nearest store to impress her.

The beginning of the film plays as light farce, as they rob banks in their bumbling fashion, and we expect it to be a sort of comedy; then we see him shoot an unarmed man on the running boards in the face, with the blood and gunshot in the same frame, and everything changes. It’s become real, and it’s not so much fun anymore. The film was daring to show the results of the violence in stark close-up, and it would keep pushing the envelope once Clyde’s brother Buck (Gene Hackman) joined the gang. Though famous for the bloody violence and frenetic terror in its shootout scenes- these are not the cool collected action fantasy heroes we admire, they panic and get away by the skin of their teeth each time- the most has a lot more to offer. The cinematography (Oscar-winning, by Burnett Guffey) is simply fantastic, hinting at their inevitable deaths subtly. A cloud’s shadow follows them in a corn field; when they visit Bonnie’s mother, they play with some kids, and when one pretends to be killed, Bonnie knows she’ll be seeing Clyde die someday. 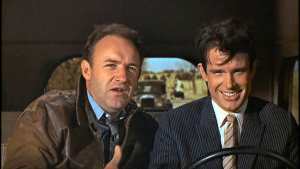 While infamous for the realistic (if not perfectly factual) portrayal of the final ambush, Gene Hackman’s death scene is much more emotional and heart-rending. Blind in one eye, barefoot and bloody, he dies surrounded by cops who have no interest in taking him in alive. In reality, it was even more brutal, with a police officer stepping on his face and preparing to deliver a final coup de grace before Buck’s wife’s piercing screams got to him. Much has been made of Estelle Parsons’ Oscar-winning performance. She screams a lot, and Blanche Barrow hated her portrayal, but her panic is probably the most realistic performance of an average Jane caught among a bunch of cold-blooded killers. We’d like to think we’d be cool like the mechanic, but let’s face it, she’s annoying because her screams break the movie fantasy of gunslinging outlaws and bring us back to the brutal reality. There’s little real glamor to it. 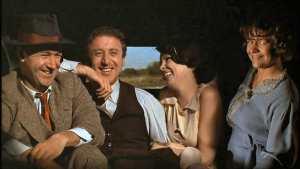 The movie is also notable for being Gene Wilder’s first role as a nebbish whose car gets stolen by the gang; he chases them in another car, then tries to run away once he recognizes them. They pick them up for a ride and end up sharing sandwiches, as the gang delights in their own notoriety, and tries to play up their Robin Hood image. Bonnie kicks him and his fiance out of the car when she finds out he’s an undertaker; she knows their spree will end in death and he’s just one more harbinger of doom. Coincidentally, in real life this meeting actually happened, and he would be their undertaker once their race was run. Wilder’s first role shows off his endearing presence, that familiar pursed lip and perked eyebrows, and slow manner of speaking that would make him a great straight man as in Blazing Saddles or alongside Richard Pryor, when he wasn’t exuding the manic comic energy he had in The Producers or Young Frankenstein.

Overall this movie is an enduring classic about the American love/hate relationship with the criminal anti-hero. There is a tragic romantic aspect to their story, but in the end, we don’t want to be Bonnie & Clyde, or idolize them. Neither is there moralizing. The law is shown as ruthless and shady- tormenting a blind woman, ambushing them, wanting to execute a dying, surrendering crook- and the bad guys are impotent, brash, flighty. There’s a famous scene where they give an evicted sharecropper a pistol to shoot up his old farm, now property of the bank; it could have been a gleeful scene, but it’s a futile gesture and the farmer knows it. Bonnie and Clyde in the headlines was more like schadenfreude for the folks who lost it all, instead of heroes.