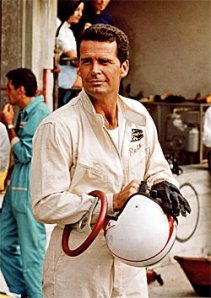 Part of me rebelled against comparing these two movies. Like Chevy & Ford guys, Porsche and Ferrari guys, car enthusiasts are usually strictly divided on these two movies. But mostly I rebelled because I didn’t want to again watch 3 fucking hours of soap opera bullshit masquerading as a car movie, in John Frankenheimer’s Grand Prix. Admittedly the racing footage is some of the best ever filmed- Frankenheimer is one of my favorite directors, and probably the best to ever direct a car chase (before you sputter about the Bourne movies, which I love, there can be no Supremacy without first having Ronin)- but his epic racing movie spends too much time off the track.

James Garner is no McQueen, but he was one of the best actors of his time; he can’t be faulted for his role, and he is one of the most memorable parts of the film. Eva Marie Saint is always good, and this is no exception; Toshiro Mifune can say more with a look than either of them could do with a soliloquoy, and having him on board gives the film class and racing cred, for not ignoring the Japanese. That being said, after watching it for three hours, all I really remember is the racing, some crying, Garner having principles, and a crash where a driver is flung from his vehicle and dies hanging limp in the trees like a rag doll. That was a very powerful image of the dangers of motor sports, and the razor’s edge these enthusiasts live on. But when it comes down to it, it’s an indulgent, bloated ’60s epic in need of serious editing. It must have looked awesome in Cinerama, though.

Le Mans is definitely a creature of the ’70s, reminiscent of Two Lane Blacktop– without dialogue for the first 37 minutes of the movie, we learn the basic story watching McQueen drive up to a section of replaced guard rail on a motorway, and contemplate it. Without a single word, we know a crash occurred here, and he is remembering it. We’re brought back to that day, and follow him as he readies for the race, the tension mounting to a crescendo. Finally all we hear is his quickening heartbeat until the light turns green and the thunder of the engines roar, and they’re off. Sure, a bit gimmicky, but still effective; you can’t say the same about some of the montages in Frankenheimer’s film.

On the other hand, Le Mans is perhaps too laconic and trim. It feels like a documentary, but even a doc gets us a little more engaged in its subjects; one hour into its 106 minutes and you’ve seen a lot of car porn, but maybe we’re a little touchy-feely and want some emotional involvement. This was an exercise in indulgence as well– McQueen drove the original director, John Sturges of The Great Escape fame, away by taking control of so many aspects of the film. TV director Lee Katzin took the helm instead, and the film suffers from McQueen’s excess. There’s less Cooler King here than the dialing-it-in cold-eyed stares of The Hunter, his last and possibly worst film.

The third act, after McQueen’s character is out of the race, drags on until they pull him back in. The drama of Lisa possibly losing two men to Le Mans is captured in a single look, but it’s not as evocative as the film’s quiet beginning. Le Mans has its own spectacular crashes, with its super-powered Porsche and Ferrari battles, but there’s a little too much slo-mo used.

So what’s the answer? Like the eternal Chevy/Ford debate, they’re both flawed but have their fans. A car fan owes it to themselves to see both of these movies and decide on their own. It’s like owning an Alfa Romeo, or a project car. It may not be perfect, but if you love cars, it’s something you just have to do.