Skip to content
HomePosts tagged 'Ilsa She Wolf of the SS'

Cap’n America punching Adolf in the kisser. America, FUCK YEAH! 4/20 is Hitler’s birthday- guess he was a stoner, man! And here are our picks to watch with Zombie Hitler, if he should ever arise. What would Zombie Hitler be like? Well, just look at this photo and imagine this watermelon is your brain: 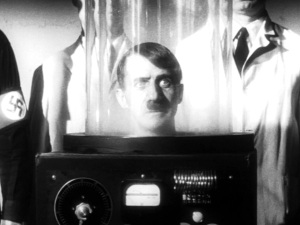 From IMDb: “Nazi madmen preserve Hitler’s brain on a small tropical island until the time is right to resurrect him and, along with him, the Third Reich.” Okay, I have to see this. It’s not on DVD, but I found it through some rarity site. You’ll get a full review sometime soon. The whole concept is hilarious. And it’s not like his brain conquered Europe. And they saved his HEAD! Wouldn’t it be funnier if it was a floating brain with a little mustache?

Zombie Hitler might cry if he watched this. Bruno Ganz plays Hitler during the last days of his failed Reich, when he has children fighting the Allies in the streets of Berlin, fanatical soldiers committing suicide rather than see their own defeat, and psychotic Nazi leaders poisoning their own children. Ganz is one of Germany’s great actors, best remembered as an angel in Wings of Desire, and he encapsulates Hitler’s terrible charisma and self-loathing with perfection. Besides, there’s wonderful schadenfreude watching these monsters suffer and consign their genes to the dunghill of history.

Ilsa, She-Wolf of the SS

It’s a lot harder to find work safe images of this, lemme tell ya.

William Goldman wrote the book, which is about a Nazi Dentist living off the diamonds he stole from the Jews he slaughtered in the camps. When his source- who sells them in the NYC Diamond district, how’s that for irony- is killed, he comes to figure out what happened. He ends up killing CIA Agent Roy Scheider, whose little brother Dustin Hoffman- a sad sack long distance runner- ends up mixed up in it. Lawrence Olivier plays the “white angel” Dr. Szell, famous for stuffing a power drill in Hoffman’s mouth and asking “Is it safe?” He also has a huge switchblade up his sleeve. He’s one of the great cinematic villains, and this is one of the best thrillers of the ’70s.

The Boys from Brazil

Nein! I am not your weiner schnitzel!

To make up for playing a Nazi, Olivier plays a Nazi hunter here, and Gregory Peck gets to play Zee German. He has a diabolical plan to use DNA harvested from Hitler to make clones of der Fuhrer, in the hope that he’ll lead a new Reich. It doesn’t make any more sense than saving Hitler’s brain, but it sure is fun! They try to raise the Little Hitlers in households similar to Adolf’s, and one kid has a pack of bloodthirsty dobermans.

aka Død snø, where a møøse once bit my sister, this is a zombie flick where skiers in Norway are beset by a horde of Nazi zombies! It was only a matter of time before someone made a Nazi zombie movie. It’s not on Netflix yet, sadly. When will Hollywood get around to making a Castle Wolfenstein movie? It would be most incredibly awesome. For now, this is the closest we get. Zombie Hitler would approve.