Fiona McVie of AuthorsInterviews asked me a few questions. I should’ve taken the Fifth, but I unwisely spoke without the presence of my counsel.

I was interviewed by the one and only Scott Montgomery, bookseller extraordinaire, for MysteryPeople.

Welcome to Sally MacLennane’s, my virtual pub. It’s cozy but there’s always room for one more, and the spacious cellar contains every libation imaginable, along with crates filled with treasures undreamed of, a couple of lime pits we don’t talk about, and an obese mouse-chaser named CatLoaf. Take any seat you like, except that one on the end, with the scally cap on it. Fellow everyone called Church, short for Church-on-Fire, always took that seat. Until one night he raised a pint to toast and keeled right over on his back, curled up like a sprayed cockroach. We call it the Death Seat, and leave it empty in his honor. Not saying you’ll get a visit from Mr. D if you sit in it, but Caesar the bartender is liable to wallop you one with the billy club he keeps under the register…

Our guest of honor today is Holly West, author of MISTRESS OF FORTUNE. She’s had stories published in Needle: A Magazine of Noir, Shotgun Honey, and in the Feeding Kate charity anthology. She also writes about crime fiction at Do Some Damage. Let’s get the blurbery out of the way:

Lady Isabel Wilde, a mistress to King Charles II, has a secret: she makes her living disguised as Mistress Ruby, a fortune-teller who caters to London’s elite. It’s a dangerous life among the charlatans, rogues and swindlers who lurk in the city’s dark corners, and when a magistrate comes to her seeking advice about a plot to kill the king, both her worlds collide in a tale of lust, political intrigue, and brutal murder.

Welcome to Belly up to the Bar, Holly. I’m having a Sazerac, made with Whistle Pig rye. What can I get you?

I’ll take a Belvedere martini, straight up, with a twist.

Historical mystery usually isn’t the kind of book I pick up, but I had a hard time putting this one down. It’s a hardboiled story, and puts us in the muddy ruts of the London streets more often than the gilded rooms of the royal court. And you know your 17th century England damn well. I felt immediately drawn into Isabel’s world. What drove you to write a story during this particular time?

First of all, I like that you call Mistress of Fortune “hardboiled.” I was absolutely going for that tone. As for writing a historical in the first place, when I was a teenager, I read a romance called Forever Amber by Kathleen Winsor. It was published in 1944 and portrays Restoration London (circa 1660-66) so vividly that it transfixed me. I’m not saying it’s the best novel ever written (it was, however, a huge bestseller at the time), but when you’re fifteen and dreaming of being a writer, books like that stay with you. From then on I studied Stuart London voraciously, collecting reference books, reading everything I could about the time period. Funny enough, I’m not all that interested in English history in general, but I’m fairly obsessed with Restoration England and King Charles II in particular. You never forget your first love, I guess.

You have a gift for character. My grandfather swam over from Ireland, and I’ve always had a bit of a chip of my shoulder against the British Empire. And yet I loved your portrayal of King Charles. He was incredibly human, and you made him very sympathetic with how precariously the crown was balanced on his balding head. But it was Isabel and her partner in crime Sam who captivated most. Tell us of her background, how she came to be a king’s mistress and where the inspiration for her came from.

Why thank you, sir! I appreciate the compliment. I’ve had a crush on King Charles II since I was fifteen years old, so by the time I started writing him at age 40, he was a pretty well formed in my mind. He was always destined to be a character in one of my novels, but coming up with Isabel Wilde was a bit more difficult. At first, all I knew was one thing—she’d be Charles’s mistress. Then I learned about Aphra Behn, a successful female playwright of the time (it’s no accident that Lucian, Isabel’s brother, is himself a playwright). Behn worked as a spy for England during her youth and as a result of her service to the Crown, incurred a large debt that Parliament subsequently refused to pay. She spent a period of time in debtor’s prison. I incorporated these details into Isabel Wilde’s back story and used them to explain her unusual choice of profession; determined never to return to prison and unwilling to take on the more typical roles—wife, prostitute, chambermaid—available to women at the time, she convinces a notorious London astrologer to teach her the soothsaying trade.

I think some readers overlook historical fiction because they forget that we’re actually living in the most peaceful of eras, as disturbing as that can be to believe. Human history is a blood trail from the Lascaux caves to the mechanized slaughter of the 20th century. What was your approach to writing a historical mystery?

The one thing I tried to keep in mind when I was writing Mistress of Fortune was that these characters, despite living 350+ years ago, were human. I think the tendency (at least it’s my tendency) when reading/writing historicals is to kind of skim over the fact that people had the same hopes, fears, ambitions, et cetera, that contemporary humans have. Their sensibilities might have been a bit rougher (for example, their attitudes toward capital punishment or their willingness to display the pickled heads of their enemies on stakes at the entrance of the city wall) but by and large, they were much more like us than not. And I tried to infuse this into my characters, their essential humanness.

Mmm… pickled heads. Would you settle for an egg, from the jar? No, don’t. It’s been there since before we were born! You have a strong voice writing as Lady Wilde, and one all your own. But who would you say are your influences?

Kathleen Winsor and Philippa Gregory for historical fiction. David Liss for historical crime fiction. For mysteries & crime fiction in general, Lawrence Block, Sue Grafton and Tana French (there are so many more, but these are some of the biggest). I love true crime and hope to write one some day. In this, Erik Larson and Truman Capote are my biggest influences. Marjorie Morningstar by Herman Wouk and The Secret History by Donna Tartt are two of the best novels I’ve ever read, and finally, I’ve got to give props to Judy Blume because her books inspired me to want to write in the first place.

Judy is a favorite of mine, too. And of course Lawrence Block, who sat in that booth for an interview, himself. Tana French simply stuns me with her stories. And you’re the second friend to recommend The Secret History, so it’s now on my list. You had my mouth watering with the descriptions of spiced ales and roasted oysters. We’ve had some great meals at mystery conventions, but what would you choose as your death row meal?

I’d choose a medium-spiced lamb korma (a risky choice, I know, given that I’m in prison) with garlic naan and a large Taj Mahal beer.

I love vindaloo myself, but my wife is a regular korma chameleon. They’d hang me for that joke in Stuart-era London, wouldn’t they? You have a background as a jewelry designer, like Lady Wilde’s brother Adam. Can you see yourself writing craft cozies around that particular subject? (No slight meant, you’re sitting in a bar that will feature in a “cozy” of sorts.) If not, what’s next on your plate?

I’ve no plan to write cozies on any subject, although the goldsmithing trade is the focus of my next book, Mistress of Lies. That said, if a good idea cropped up, I’d try my hand at a cozy, why not? Mistress of Lies is scheduled to be published by Carina Press in Fall 2014. I’m also working on another historical crime novel, this one set in post-WWII Philadelphia and featuring a large, Irish-American family.

I look forward to them both. Thank you for dropping by, Holly. MISTRESS OF FORTUNE will be released by Carina Press on February 3rd. Readers can pre-order it for Kindle, Nook, and for Kobo via many independent bookstores.

Author Rob W. Hart interviewed me on LitReactor. 10 Questions about writing, and me telling him “I ain’t no muse guy.”
Check out Rob’s Ginny Tonic stories (Needle, elsewhere) so he’ll write more of them. 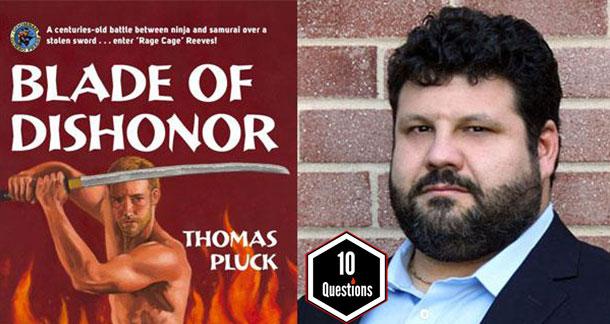 I was interviewed for The Montclair Times about Blade of Dishonor, as a local author. Journalist Kelly Ebbels met me at the historic Tierney’s Tavern for a beer and to chat pulp fiction.
Pluck Pens Pulp Fiction Warriors

And don’t forget, I will be reading from Blade of Dishonor at Watchung Booksellers tomorrow, Sunday November 3rd at 4pm.

And don’t forget to turn your clock back an hour tomorrow morning. The bookstore closes at 5.

Today I am interviewed at A Knife and a Quill (two of my favorite things) by pulp author K.A. Laity, author of the Chastity Flame espionage series.

Check it out, and check out Kate’s novels.

I was interviewed by the fine folks at Pankhearst Review a while back. I was at Bouchercon and missed it, so I’m sharing it now.

Pankhearst published the kickass pulp anthology Cars & Girls which is available in paperback and for Kindle.