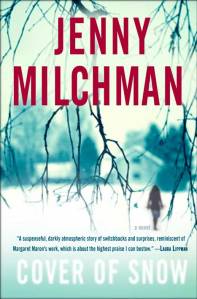 Waking up one wintry morning in her farmhouse in the Adirondack Mountains, Nora Hamilton’s world is shattered: Her husband, Brendan, has committed suicide. The first hours following Nora’s devastating discovery pass in shock. Why would a rock- solid police officer and husband suddenly kill himself? Having spent a lifetime avoiding hard truths, Nora must now start facing them. Unraveling Brendan’s final days, Nora searches for an explanation—but finds bewildering resistance from everyone in town. Nora realizes that she is asking questions no one will answer. For beneath the soft cover of snow lies a conspiracy that will do anything to keep its darkest secrets hidden.

Jenny Milchman is the author of COVER OF SNOW, due out January 15th from Ballantine Books. With a starred review from Publisher’s Weekly, and effusive praise from Harlan Coben, Laura Lippman, Lee Child, and Hank Philippi Ryan, it may be set in the frigid winters of the Adirondacks but it is white hot. I met Jenny at Watchung Booksellers for Writing Matters, a panel to introduce readers and authors, on the day she announced her book was accepted for publication. And today I invite her to Belly Up to the Bar, to talk about her journey to publication over a hot buttered rum, and whatever she’s having.

TP: Welcome to Belly up to the Bar, Jenny. What can I get you?

JM: Well, hot buttered rum is something I’ve always wanted to try, but I’m also going to set this pitcher of hot chocolate spiked with kahlua down on the bar. You need grownup hot chocolate to get through an Adirondack winter. Please–feel free to have some.

TP: First, let’s get everyone on the edge of their seats. Tell us about COVER OF SNOW.

JM: Cover of Snow came to life when one question grabbed me around the throat and wouldn’t let go. What would make a good man do the worst thing he possibly could to his wife? And what would that thing be?

TP: There’s something about being snowed in that lends itself to mystery, isn’t there? The hush that falls over the world, the bitter cold that drives inside, the secretive hooded coats we get to wear. Fargo, Snow Falling on Cedars, the popular Scandinavian thrillers all make use of the icy season. What drives your story out into the cold?

JM: All of the factors you mention—and one other. Snow makes things difficult. It’s romantic, all of that white, but it’s also very hard to live with. There are minor hassles like having to dig out your car or unfreeze your locks. And then there are bigger risks like falling or even getting lost and freezing to death.

Snow changes the landscape. One day my heroine’s husband, Brendan, went out into a snow-strewn world. And what happened out there meant that he could never really return to live amongst warmth and the sun again.

TP: I love the question that your book asks: What would make a good man to do a very bad thing? Tease us a little. You can’t tell us the answer, but what made you ask the question?

JM: I am one of those people who, to borrow author Rosellen Brown’s term, thinks in the before and after. What moments tip us over from one side of the line to the other? The question of what my heroine’s husband did was one of those. What would it be like if a woman woke up, fully and reasonably expecting her husband to be beside her, and he wasn’t?

TP: I think asking a writer her influences is rather cliche–we are influenced by all sorts of things other than books–but let me ask anyway. Are you a lifelong mystery fan, and if so, whose writing lured you into the murder biz?

JM: I am a lifelong reader of the suspense, horror, mystery, and thriller genres. As a child it was the horror writers who inspired me most of all. Stephen King, Ira Levin, William Peter Blatty; books like The Bad Seed and The Omen and Audrey Rose. The most influential mystery I ever read was Winifred by Doris Miles Disney. I think it has one of the best last lines ever written.

TP: I’ll have to check that one out. I’ve heard about your long journey to publication, and it both inspired me and steeled me for the hard work ahead. But humor us, and tell the story again for our readers.

JM: I will…just as soon as I can pick myself up off the ground and force myself to go over the harrowing details. No, I’m kidding. And Tom, please take heart—it doesn’t always take as long as it did for me. I believe that we writers all put our time in somewhere along the line. Could be in the writing, the agent search, the getting an offer part, or even the next book. At some point, it usually takes a while.

For me, I feel lucky that the writing itself is almost always pure joy. There is just nothing like a first draft for me. And I was also pretty lucky on the agent front, getting offers of representation within about eight months. But after that, things bogged down. My agents had interest from editors, but editors have to get their whole houses on board before an offer can be made.

In total, I wrote eight novels over a period of eleven years, worked with three agents who garnered fifteen almost-offers before Cover of Snow finally sold.

It happened at the eleventh hour. My agent and I were out of options, and the publishing world had changed out from under me in the decade + I spent trying. I was seriously considering publishing either on my own or with a teeny new micro press.

And then an author whose work I loved was kind enough to read my unpublished manuscript, which she loved and gave to her own editor, who also loved it, and within five weeks, I had a contract and my whole writing life—my whole life in some ways—had changed.

If anybody reading this is despairing because they haven’t broken through, don’t worry. As long as you keep trying, you haven’t failed. You just haven’t succeeded yet.

TP: Some say the mystery tale comes out of a desire for order, to know that the path to justice may be twisty and torturously slow, but is as inevitable as the passage of time. What drives you to read and write mystery fiction?

JM: That. Seriously. You just said it. I read and write so that order can be restored to an unjust universe. Would that books had such power over real life. Maybe they do in some ways.

TP: You started Take Your Child to a Bookstore Day, and coincidentally, independent booksellers reported excellent holiday sales. Tell us a bit about the experiences you’ve had with this, and what inspired it.

JM: Coincidence? I think not! No, I’m just kidding. But truthfully, part of the reason behind celebrating Take Your Child to a Bookstore Day on the first Saturday of December was to coincide with holiday gift-giving, try and suggest to people that books make great presents.

Here’s how TYCBD came to be… In 2010 I had two young children I was bringing to story hour at our local bookstore almost every week. My kids probably didn’t realize it was as much of a treat for me as for them. Which started me thinking—were other parents in on this secret? How many children knew the pleasure of spending time in a bookstore?

I frequent the mystery listserv, DorothyL, and a more avid group of readers you couldn’t hope to find. When I floated the idea for Take Your Child to a Bookstore Day, bloggers on the listserv spread the word. My husband designed a poster, a website, and bookmarks, and we designated the first Saturday in December as Take Your Child to a Bookstore Day. Just two weeks later, 80 bookstores were celebrating. We spent the next two summers driving cross-country as a family, visiting bookstores and trying to get the word out. In its third year, more than 500 bookstores in all fifty states celebrated the Day with kid-oriented events and giveaways and parties.

TP: You’re wrongly accused of murder, and tough luck, you’re facing the chair. Don’t worry, we’ll save you at the last minute, but what’s your last meal?

JM: I can’t eat before a big event. Kidding again. Dim sum. If I also get dessert, I’d like birthday cake. Someone has just arrived for my stay of execution and I feel reborn!

TP: Thank you for dropping by, Jenny. You’re off on a busy book tour. I have a feeling the we’ll be hearing a lot more about COVER OF SNOW, and I hope you’re blanketed with good reviews as the readers snowball into an avalanche of success.

JM: Love the metaphor! Thank you, Tom, for having me to your very cool venue, and for your support of authors everywhere. I look forward to hearing about your own successes! 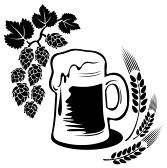 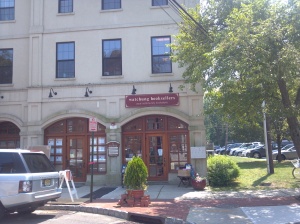 The death of the independent bookstore has been greatly exaggerated.

Some are having hard times, and some are closing. But imagine my surprise when I walked into my local, the excellent Watchung Booksellers, and found that they will be closing next week.

Now, that’s the kind of news a writer and a book lover finds joyful. I’ve known the bookmongers and proprietors for nearly twenty years, and they run a great shop with a sprawling children’s section, a meaty mystery department, and they’ve had everyone from Jenny Milchman and Dennis Tafoya to the one and only Lawrence Block signing and speaking there. All in a very efficiently used, and to dip into realtor parlance, charming and cozy space.

It’s a small store. I’ve been in smaller bookshops, but I can’t recall them, and I think they’re all in bookstore heaven now. So I am thrilled to see them taking over space from next door and embiggening themselves.

I stopped in to pick up Sara Gran’s Claire DeWitt and the City of the Dead, on the urgent recommendation of Matthew Funk, and snagged Night Soldiers by Alan Furst, after hearing about his ambitious series of linked novels set in the run-up to the Second World War. They have impeccable taste- meaning they carry books I love by friends and other authors I admire- and they’ve sold a few copies of the Lost Children Anthology, which is available from them locally and via mail order, if you like supporting indie bookstores.