If you haven’t read Lawrence Block’s fantastic anthology In Sunlight or in Shadow, stories based on the art of Edward Hopper, you are missing out. Stephen King, Joyce Carol Oates, Lee Child, Michael Connolly, Warren Moore, Jonathan Santlofer, Craig Ferguson, Megan Abbott, and LB himself among others, all contribute to a great collection of stories that run the gamut of genres and tones. And the art is beautifully reproduced in the hardcover edition (can’t speak for the paperback). 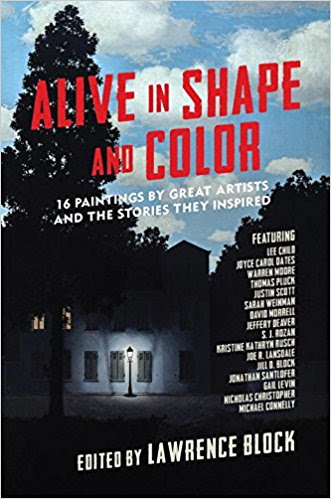 So I’m tickled pink to have a story in his follow-up to this blockbuster, which expands the influence to artists of all kinds. He calls it Alive in Shape and Color, and it includes my story “Truth Comes Out of Her Well to Shame Mankind” inspired by the painting of the same name by Jean-Léon Gérôme. I’m honored to be among fellow contributors Sarah Weinman, Joyce Carol Oates, David Morrell, S.J. Rozan, Michael Connolly, Warren Moore, Jeffery Deaver, Kristine Kathryn Rusch, Joe R. Lansdale, Craig Fergusion, Justin Scott, Lee Child, Nicholas Christopher, Gail Levin, and Jill D. Block. The art chosen ranges from Rodin, Balthus, Art Frahm, Clifford Still, Rene Magritte, Salvador Dali, Hieronymous Bosch, Hokusai, Norman Rockwell, and the cave paintings at Lascaux.

You’re not going to want to miss this one. It’s available for pre-order now.

oh, and you should read a lot, too.

Just write, really. If you need encouragement, business advice, or criticism of your work, that’s something else entirely. I’m only being somewhat facetious here. If you write, you’re a “real writer.” You’re not going to find magic on a blog or a Twitter account. And why take advice from someone like me who’s been in the biz for only a few years? It makes no sense. How about a pro who knows both traditional, “indie” and hybrid?

For practical writing advice and some business advice, I usually recommend Telling Lies for Fun and Profit by Lawrence Block, but he recently updated Writing the Novel from Plot to Print to Pixel (the original didn’t have the pixels). LB began sending out stories, then wrote speedily under pseudonyms, then wrote stand-alones under his own name, then wrote series, improving all the while, until his series characters kicked off. He certainly was born with innate talent and has spent years honing his skill, so don’t expect to emulate his success; but you can emulate his hard work, and that often bears tasty fruit. (In fact, he may have written Tasty Fruit under a pseudonym. He keeps finding erotic books he wrote back when). The point is, LB has been out on the cutting edge of the writing scene for at least fifty years. His advice is up to date and practical.

If you don’t write as much as you’d like, or if you feel daunted, I might suggest Stephen King’s On Writing. But he began 50 years ago and hit it big on his first try, so his business acumen is not relevant to most of us. His writing advice however, is spot on.

If you find yourself “blocked” often, I won’t judge. You don’t have to write every day. You know who told me that? LB. On his Write For Your Life audio mp3. The book is worthwhile, too. If you want strong exercises that will break blocks and keep them from recurring, Jerrold Mundis literally wrote the book on it: Break Writers Block Now!

I get stressed when  I think that I have to write or edit every day. It is counterproductive. But if I don’t think about it, I usually write or edit every evening after dinner and before I allow myself time to read or watch television. That works for me. The thing is, there’s no one way. Anyone who tells you different is selling you their books on how to write.

He drives the truck. That makes me the monkey. 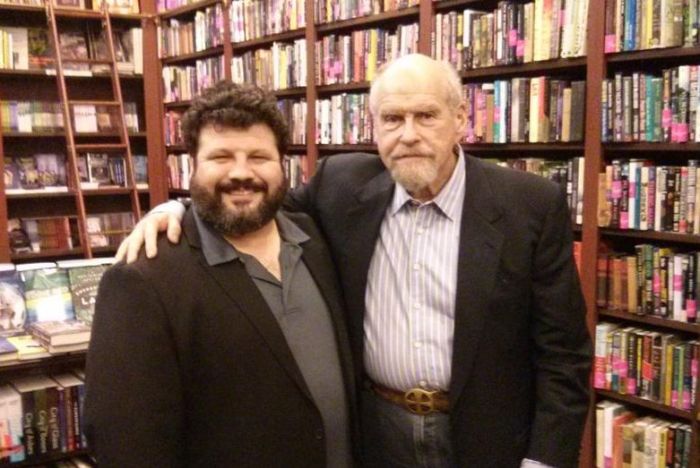 That’s Lawrence Block and myself, at the Dark City Lights: New York Stories launch party last night, held at The Mysterious Bookshop. If you haven’t been there, it’s like a cathedral to crime fiction; make your pilgrimage. They have everything. I grabbed a few copies of LB’s books- Borderline and The Crime of Our Lives- and GBH, by Ted Lewis, a fantastic crime novel from 1980 that reads like new. (If you enjoyed Get Carter, this is his masterpiece.)

Signing books with LB, Tom Callahan, Ed Parks, Erin Mitchell, S.J. Rozan, Parnell Hall, Brian Koppelman, Reed Farrel Coleman, Jerrold Mundis, Annette Meyers, Jill Block (a chip off the old… I’m sure she’s never heard that before) and publishers Peter Carlaftes and Kat Georges, was rather dreamlike. It also helps that Otto Penzler and Ian Kearn throw a great reading, well-stocked with Brooklyn Brewery suds and bottles of vino. I met editor Jaime Lewis, who worked with Preston & Child, whose Cabinet of Curiosities remains one of my favorite thrillers. Greg Rossi dropped in, and Jason Starr, and I told a lot of new folks about Noir at the Bar.

Speaking of- the next Noir at the Bar event at Shade in Manhattan (corner of West 3rd & Sullivan, right near Washington Square park) is 5/17, and will include readings from Dark City Lights. It’s a Three Rooms Press takeover! On June 7th we go back to normal, and have a great lineup, including Rob Hart reading from his debut novel NEW YORKED. Remember to join the Noir at the Bar mailing list (link is to your right) if you don’t want to miss one.

And I was profiled by The Montclair Times, about Dark City Lights. They got the name of my next project wrong–it’s “Death to Hipsters”–but it was nice talking about the town and how it inspires me.

If you want to see what 23 writers do when Lawrence Block, the crime-writer King of New York, asks them to write about the 8 million stories in the Empire city, this is the book to read.
You can order it from Amazon, your favorite e-tailer, or from your local bookstore.

And don’t forget to join us on Thursday May 7th at the Mysterious Bookshop at 6:30pm, for a signing and the official launch party. Lawrence Block, myself, and 16 other contributors will be there.

One of the things I enjoy most about Twitter is the sense of camaraderie I get with writers whose work I enjoy. While Lawrence Block had made his email address public some time ago, sending an email is more daunting than firing off a tweet, so I never took advantage of it. I’m the shy sort. Really!

So shy that when joining Twitter, I took the handle @TommySalami (which I still possess, though I’ve moved to the slightly more professional, though no less jokey name @thomaspluck). One of the first writers I followed was @LawrenceBlock, who tweeted prolifically and amiably with his readers. We chatted about his creations Bernie Rhodenbarr and Matt Scudder, and I subscribed to Mystery Scene to read his column of memoirs of his early writing days, which helped me keep my nose to the grindstone in the writing department.

I’ve never asked LB for a blurb–though I cherish the now-lost, encouraging comment he made at Beat to a Pulp, on my hardboiled fighter tale “A Glutton for Punishment”–I learned that it’s his policy not to give blurbs, or review books by living authors. And I think that is good advice for a writer. Now, I’m breaking that rule here, aren’t I? My own rule is different, I think it’s best not to say anything about a book unless I have something good to say. (If I have nothing to say, I either haven’t read it, or didn’t like it). Which works for me, because few give a damn what I have to say about someone else’s book anyway. LB, however, is another matter. He’s a master of the mystery form, a Grand one, and he’s known many others like him.

Now, he comes along with THE CRIMES OF OUR LIVES, collecting his writings on crime fiction. From Edgar Allan Poe (who he did not know) to Donald Westlake, whom he knew quite well. There are introductions, eulogies, memoirs, remembrances, and at least one salacious, if unproven anecdote, which will change the way you hear the theme to “I Love Lucy” forever. To steal from LB’s chapter on Robert B. Parker, I could listen to LB read (or write, rather) the phone book; he has a distinctive voice, and a way with words. A little chummy, but sharp-edged as well. With sentences that flow as smooth and sweet as the nectar from God’s own tit.

As a writer and a reader, this collection has have been amusing, illuminating, and soothing. As much as things have changed in the writing biz, some things remain the same, and those whose work we love–they busted their ass the same as the rest of us. And some of them are as mysterious as characters in their own novels. TCOOL is a damn good read for anyone who loves a good crime tale; I learned something new about writers whom I’ve read every word of, and was introduced to a few whose work I’m eager to become acquainted with. What are you waiting for? Get a copy.

Last year, Lawrence Block contacted me for a story. He’s one of the writers who inspired me to write, and I keep a signed copy of TELLING LIES FOR FUN AND PROFIT near my writing desk, so I buckled down to tackle an idea I’d been saving. The collection is titled DARK CITY LIGHTS, and my story “The Big Snip” appears alongside work by Jerrold Mundis, Erin Mitchell, SJ Rozan, Warren Moore, Robert Silverberg, Jonathan Santlofer and many more.
Three Rooms Press has it available for pre-order from Amazon. If you want to see what 23 writers do when Lawrence Block, the crime-writer King of New York, asks them to write about the 8 million stories in the Empire city, this is the book to read.
You can pre-order it from Amazon, or from your local bookstore. 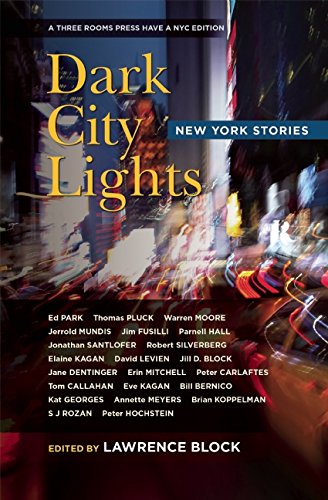 Good company. It comes out in March 2015, but you can pre-order it from Amazon.