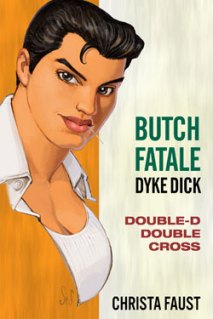 How can you not love a title like that? Especially if you dig classic pulp.

We immediately know the character. She’s butch, but she’s a fatale. She is a dyke, and she is a (private) dick. And there will be plot twists with twists who sport hefty hardware. I’m a sucker for alliteration, and it takes a cunning linguist to come up with a title like that. Ms. Faust takes the spirit of that cheeky title along for the full monty, dishing up a great read with lusty shenanigans, sharp humor, and a classic noir sensibility.

Butch is an ex-cop turned shamus, who hangs her shingle in Echo Park. An old flame drops by and she is nearly caught in flagrant delicto (well, she’s licking something, but it’s not her toe) when a client knocks on her door. It’s Mickey, a line cook at a top restaurant, who hires Butch to find her missing girlfriend. From there, the story bounces along through back alley Los Angeles, Armenian gang wars, high priced escort services, and sleazy politicians- everything you’d expect from a classic P.I. story that doesn’t just tease the tropes of the genre but delivers a rogue’s gallery of endearing characters with lives of their own. It’s a thrilling and campy caper that I truly enjoyed. The story plays your heartstrings, funny bone and gets your thumbs flicking pages faster than Butch’s tongue on a Pinkberry… smoothie. Did I mention that it’s also hotter than hell? Butch beds more broads than Bond on a Viagra bender.

I enjoyed Christa Faust‘s excellent novel (CHOKE HOLD), so I jumped on this e-book original like Butch Fatale on a busty femme. If you like your capers campy and your noir down and dirty, this read is for you.

No, this isn’t about Prop 8. Not really. I saw the indie dromedary (I refuse to say “dramedy”) The Kids Are All Right this weekend, and Prop 8- the California law against gay marriage- just happened to be overturned by a higher court. Good timing, and a very good movie.Written and directed by Lisa Cholodenko, it stars Julianne Moore and Annette Bening as a lesbian couple whose children turn 18, and want to find their biological father. He turns out to be Mark Ruffalo, who I last saw in the excellent quirky caper The Brothers Bloom. Here he’s a scruffy, motorcycle riding free spirit who runs a small organic farm, and a small restaurant from what he grows there. He looks like Toecutter from Mad Max, and yes, he can lick his eyebrows clean. 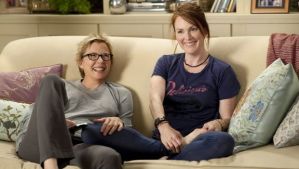 Julianne and Annette are Nic and Jules, and they’ve been a couple long enough to have a 15 year old son and an 18 year old daughter, who is on the verge of leaving for college. This life change, and the urging of her brother, spur the young Joni to find the sperm donor who gave her and her brother his set of chromosomes. She’s played by the talented young Mia Wasikowska, best known as Alice in Tim Burton’s latest. Her brother is Laser, who’s not as focused as his name would suggest. He’s hanging out with a troublesome young neighbor and his mothers know something is wrong, but not what. Together they make an altogether normal family, with Annette Bening’s Nic as a practical E.R. surgeon who brings home the bacon and likes order; Julianne’s Jules is the more free-spirited one who’s starting yet another new business, this time landscape design. Together, they are nurturing parents who have the same faults and foibles as any others, despite forming a cohesive unit that the kids call “Moms.” 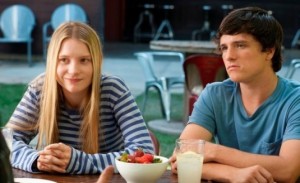 When Joni finds her their biological father, things are shaken up without the expected drama of misunderstanding and childish jealousy. Of course, Moms are a little upset and surprised, considering the obvious: weren’t we enough? Do the kids need a father? But this isn’t a single parent household, where one has been either abandoned the kids or been exiled from seeing them. That’s where the hurt comes from, when a father is absent; not from his nonexistence, but from his rejection. So as the title tells us, the kids are all right, but the story that unfolds from Mark Ruffalo’s insertion into their family unit- in more ways than one- is enjoyable and natural. Cholodenko does a great job in keeping her cards close to her chest and keeping the zones a warm shade of gray. Mistakes are made, but as Closer (full review)- one of my favorite love-gone-wrong films- reminds us, love is about compromise. 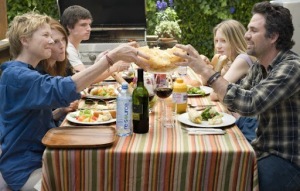 There’s plenty of situational humor and the characters are deeply detailed. Bening’s Nicky resembles the director, Emma Thompson, and even Dame Judi Dench when she gets some shocking news; I’ve loved Bening since The Grifters (full review) and this is one of her finest roles. Despite her and Julianne Moore both being instantly recognizable leading ladies, they embody their characters and we see them as Nicky and Jules. Moore retains a hint of her famous vulnerability, with a fiery independence; whether she’s in cargo shorts and hiking boots looking like a turn of the century explorer, settling back on her hips to try to look natural, when she knows she’s a bit over her head; or passionately pouncing into bed looking quite like a leopardess, with all those freckles. Cholodenko gives us plenty of close-ups and we see every crow’s foot, showing us real women instead of airbrushed icons. Even scruffy Ruffalo always looks like he ought to be hosed down, even when he’s got a suit and glasses on. 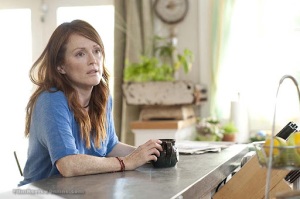 What I think I liked most was that the movie surprised me with its subtlety. It has no agenda, it doesn’t set out to prove that a lesbian couple can raise well-adjusted children. If you need to be convinced of that, get out more. It doesn’t argue that you need or don’t need a father; Ruffalo brings good and bad into the family circle. Laser doesn’t suddenly bond with this man and forget fifteen years of Moms, as we might expect from a Hollywood tale, but “Dad,” who really was a sperm donor in this case, does help the kid find the focus he needs. And nothing is made of it. He could have gotten the insight he needed from the right neighbor, or handyman. It makes for an entertaining evening, with some exciting romance that made it a good couples movie for me and Firecracker, leading to plenty of conversation over Red Mango afterward. It introduces us to characters we regret letting go, when the credits roll. And for once, we get a story about gays or lesbians that treats them just like everybody else.


4 hot freckled redhead mommas out of 5