MMA fighters agree: chankonabe, otherwise known as “sumo wrestler’s soup,” is good eats. We had some after viewing the Art of the Samurai exhibit at the Metropolitan Museum of Art in NYC a few weekends back. It’s now moved on. They were exhibiting many swords and sets of armor that had never left Japan before. I got to see a Masamune, a Muramasa, some rare older tachi swords that were not shortened after katana came into style, and some other huge and rare blades including double-edged swords based on Chinese styles. Afterward, Suzanne (shown here with her daughter Nina) suggested we go to Menchanko-Tei in midtown.

It’s a great noodle house that I hadn’t been to in years. They serve ramen and udon, but they also serve the infamous sumo soup- loaded with protein and made without the ubiquitous dashi broth of Japanese soups, because fish ain’t got arms and legs, and a wrestler needs them to win! It is most often made with chicken because they are always on two legs as a sumo wrestler should be. You can order them with slices of beef, chicken or pork. The spicy chige miso menchanko was my choice, with pork slices. It comes with fish balls, tofu and head-on shrimp by default, and the miso broth with bonito flakes is delicious on its own. 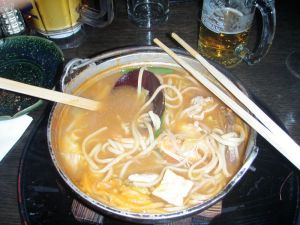 Firecracker opted for the Sara-Udon, which came with crispy noodles and lots of veggies. Everything was delicious, and there are vegetarian options depending on the broth you like. We didn’t order their ramen this time, but I’ve had it and it is on par with what I had in Japan. The sumo soup, or as close as you can get in NYC, was excellent. Very filling, intensely flavorful and generally healthy unless you add slabs of their delectable roast pork like I did! Their gyoza (dumplings) made with Berkshire pork are the best I’ve had- not counting soup dumplings. It was the perfect filling meal for a bitter windy winter day.

There are two locations, one on 45th just east of Grand Central Station, and another on 55th. At Grand Central, we stopped at the great little coffee shop Joe’s Art of Coffee, which makes a great cup. They had donuts by the Donut Plant- which were good but didn’t live up to expectations. I don’t eat a lot of sweets, and they all taste similar to me unless they are very rich. The chocolate donut had the flavor of good cocoa, and the apple fritter was better. Maybe they weren’t fresh. I only go out of my way for burgers, hot dogs and the occasional BBQ, so until I’m checking out burgers in the Lower East Side, donuts will have to wait.