I know it’s fashionable to think that Washington is full of secretive, evil organizations. But think for a minute. We’re your government. We’re the good guys! And we’re in this together.

Dean R. Koontz wrote a lot of the novels I read as a teenager. Hell, I still can’t pronounce his name without acting like a vulgar Scotsman. Watchers was the first I’d read; the tale of a bio-engineered military experiment on the loose, chased by a psychotic hitman. The experiment is twofold- a super-intelligent dog that infiltrates enemy camps, and “the ultimate predator,” which follows it in and slaughters the soldiers while they sleep. In the novel, the dog befriends a reclusive Vietnam veteran and a lonely woman, who hook up on the run.

In the movie, we get Corey Haim, his girlfriend and his mom instead; Michael Ironside of Scanners fame plays the ruthless government agent sent to track down the escaped experiments, and the predator looks like a dime store version of the creature from “The Crate” in Creepshow, and that’s what makes this ’80s trash. I defy you to watch this and not want the predator- or “Oxcom” as they call it- to tear Corey Haim and his ’80s hairdo apart.

Out-acted by a pooch

The movie begins with an explosion at the government facility, from which we see a Golden Retriever and a squealing ape escape. Not long after, we find Travis (Haim) trying to roll in the hay with his girlfriend Tracey, literally in the barn. Her Dad investigates before they can get it on, and unfortunately for him, the dog and the creature come by too. He gets attacked, the dog slinks away into Travis’s pickup truck, and Tracey gets to find her father’s severed head with the eyes removed. 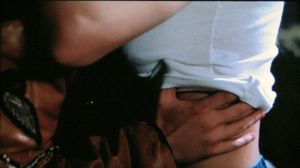 the closest we get to gratuitous boobery

Travis takes the pooch home, and it soon becomes obvious this is no ordinary dog. He knows who Abe Lincoln is! Corey calls the dog Furface. When Travis and his mom try to console Tracey over her father’s death, they find she’s been put in a government facility, and Michael Ironside and his partner Cliff are slinking around. They’re from the Government, tasked with bringing the dog and the “Oxcom” back in- though his partner wisely asks how they expect to catch this thing- with a net? 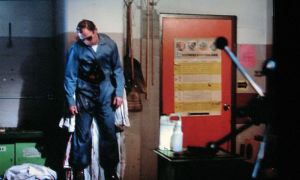 why are you hung up? at least yer not laid off!

The movie quickly degenerates into a slasher film interspersed with Corey’s hair and the dog being smart and cute. Pretty much every character we get introduced to gets slaughtered- some guy living in the woods, three friends of Travis’s, his computer teacher, the janitor. In the novel the beast was intelligent, and knew how horrific it was; like Frankenstein, that drove its pathological hatred of its creators, and the lovable dog it was partnered with. They don’t really get that across here, so it becomes a scary guy in a Sasquatch suit with claws, given a constant stream of idiotic victims. 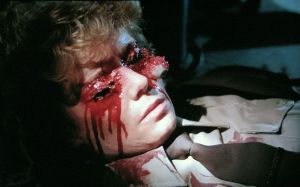 she obviously watched this movie twice.

I love a good silly horror movie- like the It’s Alive! trilogy (full review), and so on. This one just isn’t over the top enough to be very interesting. Michael Ironside is usually good for chewing up the scenery, but he’s too reserved here. In the book he’d be Vince- a government assassin who thinks he takes the souls of his victims, and wants to kill a pregnant woman to become immortal- but here he’s nothing near as colorful. Oh, he gets some crazy licks in, but from the guy from Scanners and a few years later, Highlander 2: The Quickening, we expect more.

The final battle pits Corey Haim against the beast, hiding out in a cabin in the woods with all the hunting gear he can find at the General Store. They explain his mad survival skills by showing a photo of his Dad, who was in Delta Force, and dumped him and his mom. Thanks, Dad! The effects are somewhere between The Legend of Boggy Creek (full review) and the gorilla costume from Trading Places, and if the Ultimate Predator can be taken down by Corey Haim, you know how scary it isn’t. This wasn’t the worst movie I’ve ever seen, but it was pretty disappointing, even for low budget ’80s horror. 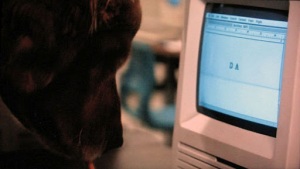 on the internet no one knows you’re a dog

Beers Required to Enjoy: 4
Could it be remade today? it should be
Quotability Rating: low
Cheese Factor: gubmint cheese
High Points: Michael Ironsides pulling a knife out of his neck
Low Point: starring Corey Haim
Gratuitous Boobies: some heavy petting