I’ve been a huge fan of the Go-Go’s since I first saw the video for “Our Lips Are Sealed” on MTV as a twelve year old boy, and I still sing along with their hits in the car, and if enough beer has been applied, at karaoke.
So I was thrilled to be the one who got to write “We Got the Beat.” You can meet the Beat Girls in March 2019. There will be a launch in L.A. and one in April at The Mysterious Bookshop. It’s coming from Down & Out Books and looks wonderful, with a lineup that includes Hilary Davidson, Lori Rader Day, Susanna Calkins, Lisa Brackmann, Nadine Nettmann, Eric Beetner, Patricia Abbott, editor Holly West herself, and an introduction from Go-Go Janet Wiedlin!
Here’s the beautiful cover that puts the Go-Go’s in a fittingly ’80s-style ’50s homage! 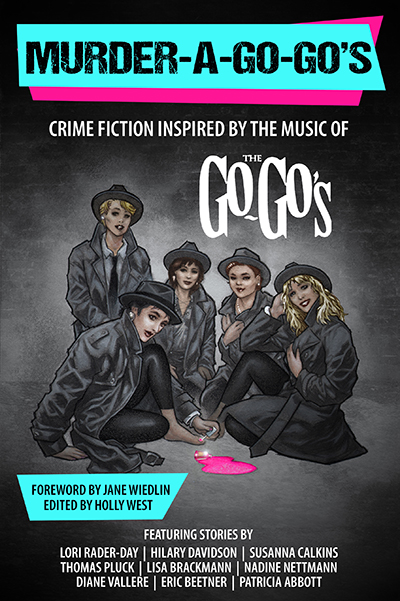 The blurbs are totally awesome:

“I always suspected that twinkle in the Go-gos’ eyes was a coded invitation to a darker world. In the hands of these 25 stellar crime fiction writers, “We Got the Beat” and “Our Lips Are Sealed” become evil little gems. A totally rad read.” —Alan Hunter, Original MTV VJ, SiriusXM Host

“Shock and Awe, that sums up my reaction to MURDER-A-GO-GO’S. Shock to live in times when “The Whole World Lost Its Head” and awe at the response of these gifted writers. Buckle up for a ride that will leave “Skidmarks on Your Heart.” —Sara Paretsky, best-selling author of the V.I. Warshawski crime series

“Who knew those happy songs by one of my all-time favorite bands, the Go-Go’s, could inspire such dark, noir, spine tingling stories?!! It’s a collection of tales of distinctly female rage—the murderous kind and other wise—to keep you up at night!”—Alison Arngrim, TV’s Nellie Oleson and NY Times bestselling author, CONFESSIONS OF A PRAIRIE BITCH

It’s available for pre-order, and I’m sure you’ll go head over heels for it. All proceeds go to benefit Planned Parenthood.

Pre-Order Link: Murder-A-Go-Go’s at Down and Out Books

It’s a bit early to crow about, because this drops in March 2019, but I’m thrilled to have a story in Holly West’s first anthology: Murder-a-Go-Go’s, all stories inspired by the songs of the Go-Go’s, with an introduction by band member Janet Wiedlin.
My story is “We Got the Beat.” Originally I chose “This Town,” but my idea fizzled and I asked if this was taken. And it wasn’t! One of their big hits! I read my story at KGB Bar a while back and it killed. I channeled my inner 15 year old and went wild. The line-up is fantastic, check it out. And be patient….
Holly is a great story writer herself, having been nominated for an Anthony award (and the short story nom has a LOT of competition!) and had her story “Don’t Fear the Ripper” collection in Otto Penzler’s collection of the greatest Jack the Ripper stories. Her historical mysteries MISTRESS OF FORTUNE and MISTRESS OF LIES are great reads, check them out. 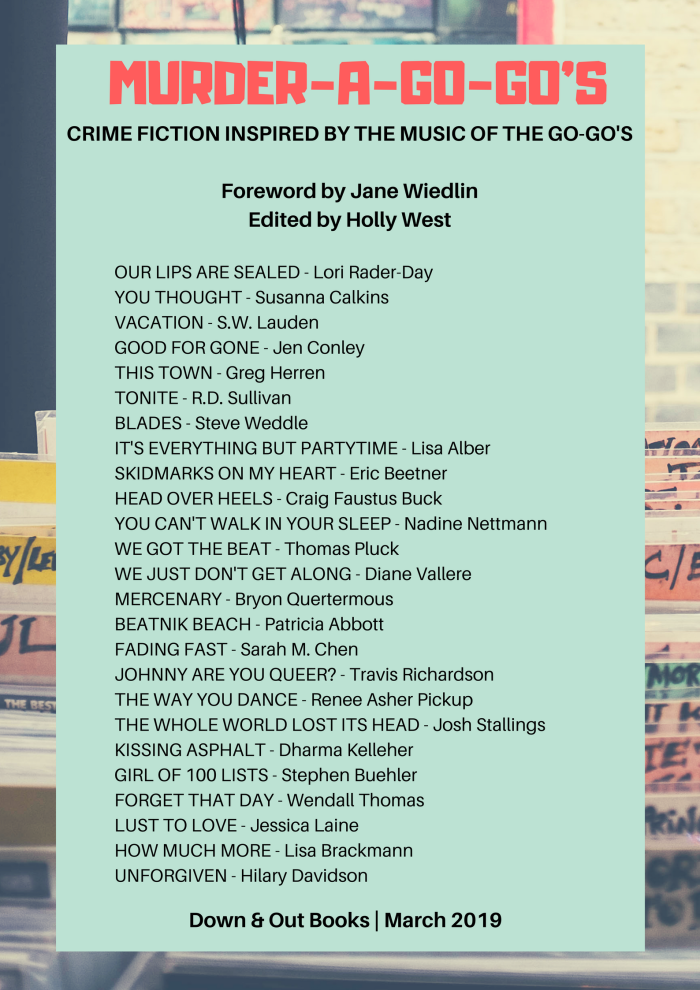