Now I am not sure of where Gator stands on most of the issues. I think he’s a one issue voter. With that issue being “kill the sumbitch sheriff who murdered my brother.”

WHITE LIGHTNING is the story of a bootlegger named Gator McClusky doing time in prison for running booze. They won’t let him go to his brother’s funeral, but the Feds have an idea he was murdered by a crooked sheriff, played by Ned Beatty. So they let Gator out and give him a supercharged beast of a Ford LTD, a super sleeper that no one in the county can catch. His mission? Run booze! Run it better than the Sheriff, so they can catch him at it. 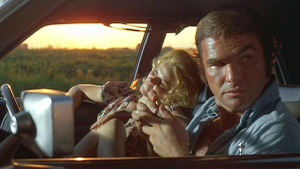 Actually the mission isn’t all that clear once Gator is out of prison. He visits friends and family, he taunts the Sheriff by racing around town, he makes a few moonshine runs. He strong-arms a mechanic into sabotaging a runner’s car so he can take over, he sleeps with his buddy’s girlfriend, he shoots up a few crooked lawmen and races all over creation. This was before Reynolds got huge and let his ego take over, and he plays a backwoods boy quite well. He’s a little rough around the edges, but he can charm the bloomers off a sweet county clerk. I had never seen this minor classic, but I remember watching Gator, the sequel, on Videodisc back in the day. Yep, my father had one of those. I bought an HD-DVD player, so choosing the losing medium must be in our blood. 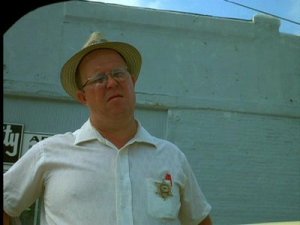 White Lightning was a lot of fun. It’s not quite up there with VANISHING POINT and BULLITT for car movies, but Hal Needham did the stunts, and it makes for a nostalgic and enjoyable night’s viewing. I drank an Abita and remembered a simpler time, when a fast car, a quick wit and a whole lot of guts was all you needed to wipe the county clean of evil. Movies like this, Dirty Mary Crazy Larry, and Mad Max certainly inspired me to write  Jay Desmarteaux. 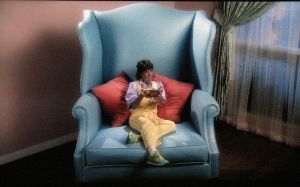 Remember back when Joel Schumacher made good movies, like D.C. Cab? That’s the one with Gary Busey and Mr. T in it. Well, even before that, he made a crazy little movie with Lily Tomlin called The Incredible Shrinking Woman, that was on HBO in heavy rotation for a few years of the ’80s. We watched it a dozen times. We loved it.

This was what we had for family-friendly comedy back then, where good actors and comedians debase themselves by taking the sting out of their work to reach a wider audience. Robin Williams and Cuba Gooding Jr. were not the first to make this fiendish devil’s bargain, as Andy Kaufman will tell you when he made Heartbeeps. This is slightly better, mostly because Lily Tomlin’s humor wasn’t quite as subversive. She manages to put her characters into some roles, but the amateur script by long-time collaborator Jane Wagner- whose only other movie credit is the abysmal Moment by Moment– is more like a buzz than a laugh-out-loud comedy.

We meet Lily as homemaker Pat Kramer and her three crazy kids at the supermarket, where marketers force her to taste-test Cheez Teez. The movie’s underlying gag is consumerism, marketing and how everything is artificial; it’s a bit of a leftover from the ’70s, before everyone just bought a Walkman to drown out the sobs of the Indian crying by the polluted riverside. The salesman assures her that Cheez Teez has a shelf life of 12 years, so who cares if it tastes like crap? As she drives home, she passes her neighbors who look like plastic suburban cut-outs, suggesting that she try product X or brand Y.

And when hubby comes home- Charles Grodin, who’s unfortunately given little to do except be a push-over- he has her try a new perfume that eats through her blouse. That’s one way to get a woman’s top off, I guess. She comes up with the name “Sexpot” for the perfume, and the next day Grodin tries to sell it to his boss (Ned Beatty, who thankfully neither gets raped nor bares his ass) at a big meeting.

“Sexpot. Makes me think of sex… and dope.”

Lily- I mean Pat- interrupts the meeting with a call- her blouse has disappeared. Uh oh. When hubby comes home, she’s a little shorter. So they go to the doctor, where she’s given a barrage of tests and run through machines and computers which tell her… she’s shrinking! No one has any solution, and it begins getting worse. Soon her neighbor Judith Beasley (also Lily) has to take her shopping, where she rides in a cart, and after everyone wants a peek at her, she hides in a shopping bag. 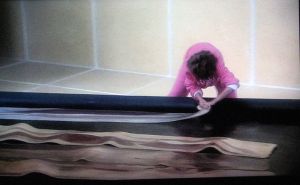 As Pat slowly shrinks, day by day, she deals with problems of unwanted fame, unruly kids who ignore her now that she can only throw a Barbie shoe at them, and becoming more and more minuscule in the eyes of her husband. He wants her to keep quiet about the source of the problem so he doesn’t lose his job, and when she has her 15 minutes on a big talk show- where the insipid and perfectly coiffed host sings “Little Things Mean a Lot,” in one of the movie’s best satirical moments- she doesn’t out the company. 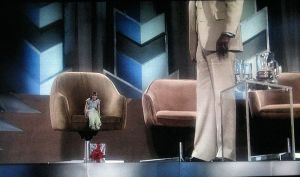 The corporation’s overlords, who conveniently wear goatees and black suits, have bigger plans for the chemicals that caused this. They want to shrink the world and rule as giants! At first they try to trick Pat into having a doll made of her, but when that fails they just snatch her. After all, by this point she fits in a shirt pocket. This is where some of the best effects are- they use forced perspective, but also built some huge sets of a kitchen sink, a doll house, and a giant skateboard that she goes flying across the room on when she makes one last attempt at getting close to hubby. These are all quite good for the time- There’s a creepy giant Ken Doll in the dollhouse that she smacks around, a giant Betsy Wetsy that pees on her, and a randy robot toy she must contend with.

The story shifts when she falls down the garbage disposal while Concepcion is distracted by her Latino beats. She escapes by building a tower out of toast, but her family thinks she’s dead- because the Evil Corporation has snatched her to their secret lab! The lab is one of the best parts- there’s a doofus lab assistant named Rob (Mark Blankfield) and a gorilla named Sidney who knows sign language. It’s make-up master Rick Baker under the suit, which of course looks incredibly real. Before they can use Pat’s blood to shrink the world, can she use her smarts, a gorilla who knows sign language, and a stoner lab assistant to escape? No, I think she dies in the clutches of mad scientist Henry Gibson. What do you think?

Schumacher manages to keep a low baseline of comedic energy but I wonder how much better it would have been with John Landis, the original director attached. If you love Lily Tomlin, you should see this, but it’s almost like Andy Kaufman in Heartbeeps– you won’t see her at her very best. It’s a sentimental and cute relic of the ’80s, and it’s occasionally on cable still, so if you miss seeing Lily Tomlin flying by on a skateboard screaming “ai yi yi!!” give it a watch. 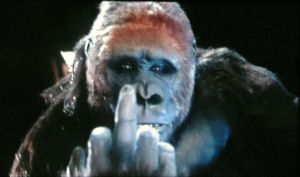