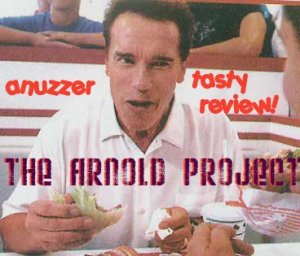 After It’s a Mad Mad Mad Mad World, ensemble road comedies became all the rage, but few if any captured the same magic. Scavenger Hunt is not one of them, but it manages to collect some of the best comic actors of the time and thus keeps a low buzz of enjoyment throughout. It’s a long way in before Arnold shows up as a gym instructor named Lars, and it’s a big step backward from his role in Stay Hungry– he just has a cameo, really, dragging Tony Randall into a fitness regimen when he just wants to steal a medicine ball. 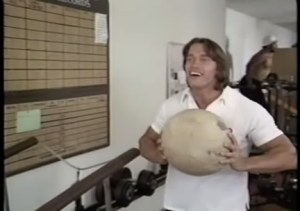 Board game creator Mr. Parker (of Bros. fame) croaks one day while playing games with his sexy nurse, and wills his inheritance to the heirs who complete his challenge- a scavenger hunt! They have to solve the clues and collect the proper “treasures,” as the game goes. Vincent Price is the croaker- he dies playing an analog version of Frogger- and his heirs include: 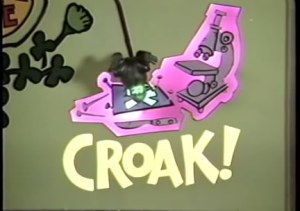 His servants, with Cleavon Little as the chauffeur, James Coco as the chef, and of course a ditzy French maid and Roddy MacDowall as an effete Brit butler; 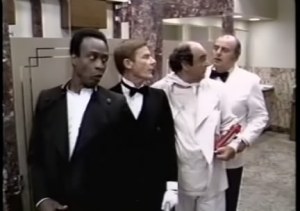 Tony Randall with geeky glasses and a gaggle of kids;

Two guys (including Dirk Benedict, “Face” from the A-Team) and their shag van, with an earnestly mourning gal in tow; 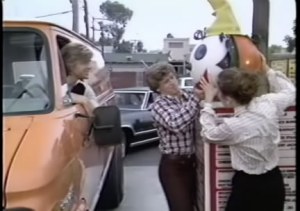 His mercenary sister (Cloris Leachman), her idiot son, and Richard Benjamin as her sleazy lawyer; they’re the bad guys if you can’t figure it out;

and Richard Mulligan of “Soap” fame as Dummitz the dopey cab driver. 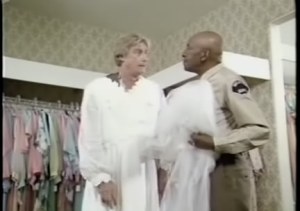 They get their list and hit the road in Cadillacs, vans, cabs and convertibles, stealing everything from toilets to Jack in the Box heads, Rolls Royce grilles, beehives and carnival prizes. If Tony Randall annoyed you on “The Odd Couple,” you’ll be delighted to watch him try to snatch a beehive. This is the kind of movie where Richard Benjamin steals an old Indian’s dentures, and he shoots arrows at their Cadillac, and tracks them with a tomahawk the whole time. 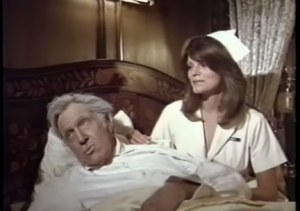 Cameos are the bread and butter of these films, and that’s where Arnie comes in- along with Ruth Gordon, Scatman Crothers, Steven “Flounder” Furst, and Meat Loaf! The film is elevated by Cleavon Little, best known as Bart from Blazing Saddles, who always brought class to everything he did. It helps that this was directed by Michael Schultz, one of the most prolific black directors, who also brought us The Last Dragon (full review), Car Wash, Cooley High, Krush Groove and that insane Beatles cover musical Sgt. Pepper’s Lonely Hearts Club Band. 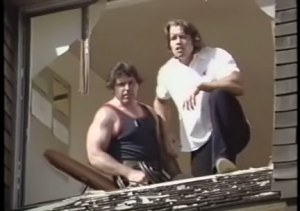 I can watch Scatman Crothers and Ruth Gordon in anything. Here they have a lot of fun, as a security guard who catches Dummitz in a bridal gown, and a saucy old gal with an arsenal full of weapons. Meat Loaf plays Scum, leader of a biker gang. The movie is actually pretty good, and I forgot I was watching for Arnold! Some of the humor is inspired, like when Cleavon & co. get trapped in a school, and try to set off the sprinkler- but the sprinkler catches on fire! 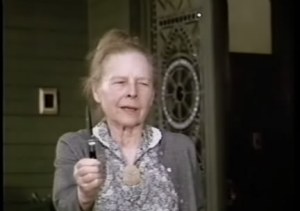 The ending is a bit weak, but all movies of this kind suffer once all the heirs or challengers come together. Mad Mad World topped it all with a crazy scene on a fire truck ladder where all the greedy goofballs got their comeuppance, but Scavenger Hunt opts for a lesson about sharing. It sort of fizzles out, but it’s satisfying to see the good guys win, even if they were thieves too. 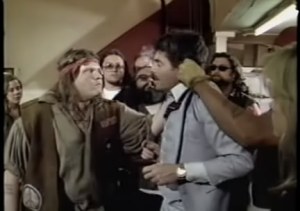 Rating: You should not drink… and bake!
(low Arnold content, but otherwise an entertaining bit of ’70s nostalgia)

View all the entries in The Arnold Project