Looking like a cross between a chestburster, Audrey II from Little Shop of Horrors, and a fleshy lobster, The Deadly Spawn: known in some parts as Return of the Alien’s Deadly Spawn, cashed in on the spectacular success of Sigourney Weaver’s panty battle in space by bringing horrible creatures to Earth to feast upon us. Over the years, I remember eager Giger fans hoping that every cheap cash-in was an actual sequel. 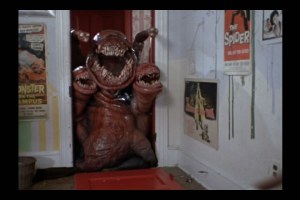 You can go a long way with a freaky critter design.

This was long before San Diego Comic Con was around to leak every bit of movie minutiae, and I remember going to a Creation Con dressed as Arthur Dent and arguing with a scrawny nerd who claimed Galaxy of Terror– a delightful Corman vehicle with Ray Walston and Sid “I live and die by the crystals!” Haig that James Cameron cut his teeth on as A.D.- was the official sequel to Alien. Thank goodness Cameron would give us Aliens a few years later and end the argument.

But before then we had The Deadly Spawn, a surprisingly effective cheapo horror film that begins with a “meteor” crashing to earth near a campsite, where the curious campers become chow for a shadowy, snaky creature with ferocious fangs and an unseemly appetite. Not long after it’s in someone’s basement, chomping off the face of a housewife in her pink terry cloth robe. After hubby’s evisceration is seen only in shadow, I thought this was gonna be a ripoff, where we only see the creature for a few seconds until the end. But no, they make the best use of the “severed arm tapping on the shoulder” gag- even better than Jurassic Park- that I’ve ever seen, and the huge lamprey-like beast is soon in our face. And its victim’s is off. Nice effects. Damn.

I gotta hand it to these low budget film makers

The movie pays homage to horror by giving us a nerdy household with a science fiction loving Dad and Son, and a kid named Pete who makes monster costumes and loves ‘5os-era monster movies. He names his favorites as The Mole People and The Terror from Beyond Space, and sneaks around with capes and rubber masks on. Unfortunately the portions of the movie not involving a three-headed alien lamprey gnawing fingers and faces off are near MST3k material. I kept waiting for Charles to befriend the sluglike alien spawn that swim like toothy sperm in his blood-laked basement. And the little monster lover does not disappoint! Just like Trumpy in Pod People, he has a new misunderstood pal from outer space. I kept hoping he’d direct the creature to attack his enemies, as he stood back in his glorious red cape.

You fool! I possess a Cape of Lamprey Control!

What really shines are the effects, which are quite good for a film of this nature. They’re revolting as hell. Watching the little slugspawn pull apart a rubber human head reveal the gaping eyes of the skull beneath? The monster itself, with row upon row of glistening, recurved fangs? Brilliant. The cast of nobodies are deservingly devoured and their careers mostly begin and end with this film. But the movie is easily forgiven for unforgettable scenes like the spawn nibbling on the toesies of the old biddies having a potluck dinner. It also has one of the great “Blob” endings- what I like to call them- where we think the crisis is over, but it’s only just begun. If you’ve seen The Blob, it ends with the frozen goo in the Arctic getting frisky and under “The End” it reads “…Or Is It?”; that’s been copied endlessly since, and here we get a Spawn the size of a mountain awaking to chomp some more. Perfect.

The perils of using too much exfoliating cream

Now normally I’d love a movie where a kid with a proclivity for running around in a cape saves the day with nothing more than a fake rubber head and an extension cord, but it’s hard to recommend The Deadly Spawn for anyone but the lover of gory bad movies. It just doesn’t have the charm of Night of the Creeps or The Gate, but it does have a unique and disgusting creature and plenty of gore. Other Alien ripoffs like Galaxy of Terror jolt us with boobies and bizarre sex (and presumably, with a name like Inseminoid, that does too) but this one eschews it. I’m not sure it would have added to it anyway. According to fellow blogger Dreamin Demon it was filmed over a period of 2 years of weekends, so that makes it more like homebrewed films such as Equinox (full review), giving it charms of its own. Plus, it was made right here in New Jersey, with one of the locations being fantasy artist (and co-producer) Tim Hildebrandt’s house in Bergen County.

Lookin’ meaner than a Dune sandworm designed by David Cronenberg

This is no Troll 2 and is a fine entry in the 80’s Trash of the Week. Lovers of cheesy horror will get their fix, and because most of the actors are family or people working for free after answering an ad in the paper, you never know who’s gonna die next. One hottie famously got a job and had to leave, so the monster surreptitiously gnaws off her head and punts her out the window! You gotta love it. John Dods, the man behind the creature, went on to be a make-up artist on many Hollywood films and Broadway productions, creating the masks for Disney’s Beauty and the Beast and the prosthetics for Young Frankenstein. The film makers also have a website up with plenty of behind the scenes photos and information for fans. Check it out! 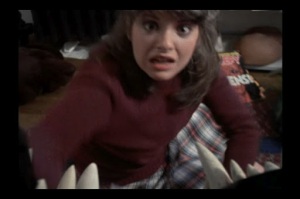 One of many monster chomper POV shots