The road I walk, I walk alone.

Robert E. Howard created some of the most memorable characters in fiction; most famously Conan the Cimmerian, a barbarian unsoiled by the weaknesses of civilization. I wrote in dept about Conan here, and when I’d heard there was a biographical film based on Howard’s life, a romance of all things, I had to watch it. It helped that Vincent D’Onofrio, that intense actor who gave us Private Pyle from Full Metal Jacket, played Howard himself. And Renée Zellweger plays Novalyne Price Ellis, a schoolteacher who had a brief friendship and romance with the author, and was perhaps the only person who walked alongside him, on the road he professed to walk alone.

“A morose, ungainly misfit among men”

Based upon Ellis’s memoir, “One Who Walked Alone,” it captures small town Texas life in 1933
when Novalyne, a new schoolteacher, arrives in town. She lives at a boarding house for single women, but is rather plucky for a woman of the time. When she hears that a published writer, a bachelor of her age, lives in town she finds a way to meet him. And he’s quite unlike any man she’s met before. The pulp writer is a boisterous dreamer, a big handsome poet of strong convictions and little care of who thinks what about him. 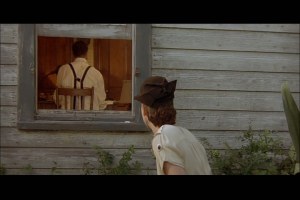 At first, this appeals to Novalyne and they have a sort of courtship; but as he opens up to her, she seems the deeply pained man inside. Howard was an incredible prolific writer and filled volumes with his tales of Conan, Solomon Kane, Kull, Bran Mak Morn hammering away at his typewriter long into the night; at pennies a word, he made thousands… to pay for his mother’s medical bills. She had tuberculosis, and Howard was writing for her life. Early on in the film, we see the spell that mother holds over son, and how inside Howard is still a vulnerable little boy whose had a sickly mom since childhood, and will do anything to save her.

When Novalyne calls the house, since Howard doesn’t seek her out for a second date, his mother just says he’s too busy, and never gives him messages. Finally Novalyne goes to the house, and hears him reciting to himself as he types away. It’s a fine role for Zellweger, famous for later becoming Bridget Jones, and she’s utterly believable as a fiery Texas woman who refuses the fetters society places on her. She sees a kindred spirit in Bob, who has no use for civilization; Conan is constantly described as more animal than man, lean and hungry, not made lazy, dull and weak by civilized conveniences. Howard often forwent a fedora for a sombrero, finding it more practical; but we get the feeling he’s goading people on, wanting them to laugh, so he can give them a piece of his mind.

All men can go to hell!
We are, every damn one of us!

He admires her seeking him out, and while he is as unsocialized as his hero, showing up for a date under-dressed, and taking her to see films like Captain Blood, they manage a courtship of kindred spirits. He’s trapped by his mother’s rigid hold on him, her sickness making her impossble to deny, and Novalyne by her sex. But while Howard demands loyalty, he doesn’t expect her to behave any preconceived way. They quarrel and test each other; he lends her a risque book, to see how inhibited she is, and she refuses to be bullied by his facade, and shows him that he can’t scare her off.

oward’s life is a sad story, and Dan Ireland’s film manages to make a difficult man engrossing to watch. When he describes his tales to Novalyne, the background darkens and sounds of swordplay echo all around. He could come off as ridiculous, but he doesn’t. That’s to D’Onofrio’s credit as well, making him more than an overgrown boy with escapist fantasies, but a writer capable of building entire mythologies in his head and putting them to paper in a shorter time than it took Tolkien to sharpen his pencil. Howard’s worlds were more raw, and hardly as detailed, but just as alive. And while “troubled” puts it lightly, D’Onofrio’s Howard is certainly appealing enough to make the passionate kisses he and Novalyne share believable.

In the end, Novalyne was able to shake off the fetters of society and went to LSU where she taught for many years. Howard was never able to break the bonds his mother had on him, and when he learned that her disease was terminal, he took his own life. But for a short time he created some of the most memorable “yarns,” as he called them, ever written, and got to share some time with a woman who could stand up to his Conan-size temper. Perhaps she influenced his character of Valeria, the fiery swordswoman with an even sharper tongue.

“Kin I git another peek?”

Unfairly maligned revisionist Western about a pair of gunmen who clean up Western towns- Ed Harris and Viggo Mortensen. They’ve been working together so long that they;’re closer than fellow soldiers in a long war. They get hired to bring law to a frontier town where Randall Bragg (Jeremy Irons) and his men have had their way for too long. Ed’s damn quick with a gun, and Viggo lugs around an 8-gauge shotgun that looks like two lengths of sewer pipe over his shoulder, capable of peppering entire gangs with buckshot with one pull of the trigger. 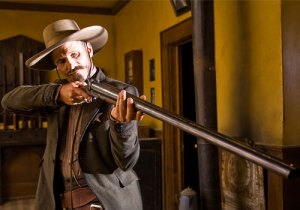 It shoots through little houses on the prairie.

Things get complicated when a Renee Zellweger, “a woman who ain’t married or a whore,” comes to town. Ed falls for her hard, and is quite innocent in the ways of women. And as a woman in the wild west, she has a way of “always landing on her feet.” It’s not as straightforward as 3:10 to Yuma, nor as contemplative as The Assassination of Jesse James by the Coward Robert Ford, but somewhere in-between. I enjoyed the characters and the story, and while the end seems a bit rushed, it works. If you’re expecting a simple shoot-out movie, you may be angry at Zellweger’s intrusion, but she’s much of the point of the tale- just listen when she’s dismissed from the “man talk” and performs scales on her piano. Passive-aggressive much? We also get a fine bit part by Lance Henriksen as another hired gun. If you like modern westerns, this is a good one, based on a Robert “Spenser” Parker novel.